Marijuana enthusiasts are in for a reckoning. While legalization is creating a billion-dollar industry and new champions are emerging from every angle, it’s also opening doors for new scientific research. Though marijuana is being shown to be helpful in a variety of ways, such as reducing opioid addiction rates in American states with legalized weed, not every anecdotal success story is holding up to closer scrutiny.

New research from UNSW Sydney tracked 1,514 people suffering from chronic non-cancer pain for a median time span of a decade. At the end of this four-year study, one of the longest of its kind, the marijuana group reported experiencing more pain, did not cope with their pain as well, and said that pain interfered with their lives more than non-cannabis opioid users.

A number of factors are at play. Firstly, a high percentage of participants suffered from mental health problems as well as chronic non-cancer pain. This should not be surprising, given that pain is often a neurological phenomenon regardless of how it manifests. The link between psychic and physical pain is often strong; they influence one another, just as anxiety and depression are sometimes shades of the same problem, one leading to the other.

While the median length of chronic pain was ten years, participants were recruited with as little as three months of experiencing chronic pain. They had to have been using opioids for at least six weeks. What might be the most uncertain aspect of this study is that cannabis users were not required to stop taking opioids. How marijuana interacts with opioids could play an important role in pain tolerance and perception.

Interestingly, the researchers note that cannabis use did not lead to a drop in opioid usage, which is different from what has been happening in America:

The authors then list reasons for discontinuation of cannabis, including lack of efficacy, access difficulties, and legal concerns. The latter two are not of concern to American citizens that live in states that have legalized marijuana medically or recreationally. The tension of acquiring marijuana or in fearing jail time in Australia could have influenced perceived efficacy. Due to this lack of control we should treat the results somewhat skeptically. 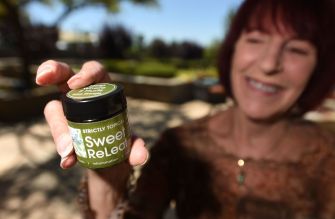 Kyle Johnson, co-chair of the Cannabis Discussion Club, holds up a medicinal marijuana product at Trilogy at the Vineyards in Brentwood, some 55 miles east of San Francisco, California, on June, 21, 2018. – Seniors in the United States are increasingly turning to cannabis to treat their aches and pains as the craze for the drug spreads across the country and more states legalize it. (Photo: Josh Edelson/AFP/Getty Images)

Other studies have also not shown definitive proof of cannabis’s efficacy in treating pain, however. A 2017 meta-analysis “found modest evidence supporting the use of cannabinoid pharmacotherapy for pain.” That is, of course, better than the results in Australia (based on a number of studies, not only one), but it’s also no shining endorsement.

Then there’s the factor of the type of pain. As the pro-marijuana site, Leafly, states,

Leafly lists a number of studies backing up positive claims of treating pain at credible institutions, including Harvard. These are important, for if treatments for chronic pain include either opioids or cannabis, we need only look at the rising number of deaths and skyrocketing addiction rates as reason enough for seeking alternative therapies from our current established model of pill prescription.

Still, that therapy replacing opioids must be equally effective. Whatever its causes, pain ruins lives. Not every opioid user is an addict; plenty of cannabis users experience pain relief. We must keep investigating. A controlled study, such as marijuana or opioids instead of marijuana and opioids if you want, is warranted. Deciphering types of pain is also necessary. Then we’ll get a better handle on what can actually work.

Your brain ‘wiggles’ a little with every heartbeat

Looking for a heartbeat? Advances in the MRI field can now show you.