The precise formation of the mineral magnesite is MgCO3, which is one part magnesium, one part carbon, and three parts oxygen.

Put together, it forms a mineral that can actually trap carbon molecules—potentially, a humanity-saving discovery. 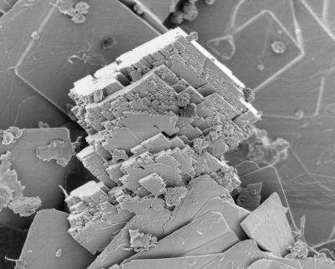 There are two major problems so far with it:

1) It takes a metric ton of the stuff to remove a half-ton of carbon from the atmosphere. This will likely create a situation where the mineral works as intended, but storing those tons of magnesite will become a bigger problem.

2) It takes hundreds of thousands of years for the mineral to form naturally, through a process known as hydrothermal metamorphism, where water at high temperatures, combined with pressure, changes magnesium-rich rocks such as peridotite into magnesite.

What these scientists have at least initially solved is the second problem. They have found a much faster way to create magnesite. To do so, they used polystyrene microspheres, which are used in many disciplines of science and are widely available, to cause magnesite crystallization within 72 days—exponentially faster, in other words. A bonus is that it happens at room temperature, which means it doesn’t take energy to create it.

“Our work shows two things. Firstly, we have explained how and how fast magnesite forms naturally. This is a process which takes hundreds to thousands of years in nature at Earth’s surface. The second thing we have done is to demonstrate a pathway which speeds this process up dramatically,” said Professor Ian Power of Trent University, Ontario, CA, study lead. 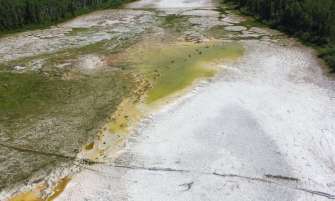 Since humans add 40 billion tons of extra carbon dioxide to the atmosphere every year, doing the quick math tells us: It will take 20 billion tons of magnesite, per year, to trap all of that.

More from Professor Power: ”For now, we recognize that this is an experimental process, and will need to be scaled up before we can be sure that magnesite can be used in carbon sequestration. This depends on several variables, including the price of carbon and the refinement of the sequestration technology, but we now know that the science makes it do-able.”

3 ways to ensure the internet’s future is creative, collaborative, and fair

The European Commission is about to pass some laws regulating the future of the Internet. Here’s how to make sure these laws are fair and just.