The question might come out of the blue at your checkup and take you a moment to understand: “How are you feeling?” Ah, what your doctor is asking is if you’re depressed. Or maybe you know you’re depressed, and have made an appointment to get some help. Either way, the demoralizing — or should we say “depressing?” — truth is the doctor only has a couple of things to suggest, and no clue as to which, if either, will work:

They’re equally effective, but mostly not — only about 40% of patients will see improvement, according to Vox. Stanford professor Leanne Maree Williams tells Vox, “It is currently complete primitive guesswork. It’s hard to imagine how you can do worse than the current situation, to be honest.” And that’s a problem. The NIH estimates that 16.1 million American adults experienced at least one depressive episode in 2015. 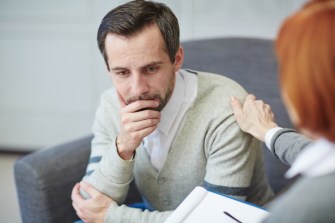 The Mayo Clinic defines “depression” this way: “Depression is a mood disorder that causes a persistent feeling of sadness and loss of interest.” Beyond that, it’s most likely a number of conditions lumped into one, and hence there’s no universally effective treatment.

Here’s what we mean. A formal diagnosis of depression requires a patient to have five of the following criteria from the Diagnostic and Statistical Manual of Mental Disorders:

1. Depressed mood or irritable most of the day, nearly every day, as indicated by either subjective report (e.g., feels sad or empty) or observation made by others (e.g., appears tearful).
2. Decreased interest or pleasure in most activities, most of each day
3. Significant weight change (5%) or change in appetite
4. Change in sleep: Insomnia or hypersomnia
5. Change in activity: Psychomotor agitation or retardation
6. Fatigue or loss of energy
7. Guilt/worthlessness: Feelings of worthlessness or excessive or inappropriate guilt
8. Concentration:diminished ability to think or concentrate, or more indecisiveness
9. Suicidality:Thoughts of death or suicide, or has suicide plan

Not only are all these symptoms unlikely to share a common cause, but even the same symptom can spring from different biological triggers. “It may be the case that, yes, perhaps there are hundreds of kinds of depression,” says research psychiatrist Conor Liston at Weill Cornell Medical College. “There’s a feeling of frustration that I share with most psychiatrists that a lot of our work is trial and error. And so it’s frustrating to not have more objective data to drive our decision-making.”

Liston is now engaged in a project to identify the various subtypes of depression using fMRI scans and machine learning. He and a team of American and Canadian scientists scanned 1,118 subjects in a resting state, a huge sample for a study such as this. As subjects lay there, doing nothing in particular, the fMRI scanners kept an eye on their brains, looking to find two or more regions that tended to be active at the same time. The stronger the correlation, the stronger these areas’ connections were assumed to be. By studying resting-state activity, the idea was to discern each patient’s “default” connections. Of the 1,118 subjects, 458 were diagnosed depressives.

The team tasked their AI with seeing if it could identify patients with depression based on their connections and, amazingly, the computer got it right 84% of the time.

Next, the computer looked at only the scans from depressed subjects to see if it could detect brain activity that signified depression. It came up with four depression-related subtypes of activity, or “biotypes,” that described the interaction between the medial prefrontal cortex and other areas. The medial prefrontal cortex is believed to be involved in thought about oneself.

The four biotypes are:

Liston was also interested in seeing how the chances of successful treatment differed between biotypes, and performed transcranial magnetic stimulation (TMS) on his depressed subjects. It’s a non-invasive treatment that doctors may resort to when talk-based and medicinal therapies don’t work. 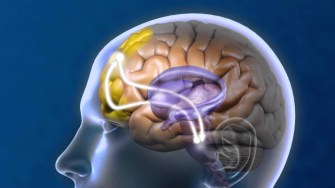 He found that TMS was more than three times more likely to succeed in Biotype 1 patients than in Biotype 2 and 4.

Another research team using fMRIs and machine learning approached the problem from essentially the opposite direction, and wound up with very similar results, though their biotypes were a bit different than Liston’s. After taking resting-state fMRI scans of 122 depression sufferers, they treated the subjects for 12 weeks using either CBT or medications (SSRIs or SNRIs). At the end of that time, the subjects were asked if their depression had been resolved, and the researchers then had their computer look through the fMRIs to see if it could detect brain activity patterns that corresponded to the success stories.

Psychologist W. Edward Craighead, one of this team’s scientists, tells Vox that, “The type of brain that responds to psychotherapy is where there’s a strong pattern of connectivity between the frontal areas of the brain, which are involved more in thinking, talking, and problem solving, etc., with other portions of the brain. Whereas people who have low connectivity — the opposite pattern — respond to the medication.”

Statistically, subjects who got better and had strong connections had a 76% likelihood of responding well to CBT, and just a 5-10% of responding to medication. For those with weaker connections, the findings were flipped: They had a 50% chance of succeeding on meds and just 5% odds of getting better via CBT. Given that only 58 participants clearly got better, the study has a small sample size — only 58 participants clearly got better — and so further studies would be needed to verify its findings.

In any event, both of these studies represent a beginning for combining AI and fMRIs to nail down the mechanics of depression, and work out the optimal treatments for this often intractable and life-diminishing condition.

There is a new era of PTSD science just around the corner.