A new approach to energy storage could soon allow you to charge your phone battery in seconds.

“This is truly a revolutionary battery architecture,” Ulrich Wiesner, the Spencer T. Olin Professor of Engineering in the Department of Materials Science and Engineering Wiesner, told the Cornell Chronicle. Wiesner is leading the group of researchers whose paper, ‘Block Copolymer Derived 3-D Interpenetrating Multifunctional Gyroidal Nanohybrid for Electrical Energy Storage,’ was published May 16 in Energy and Environmental Science.

The new model upends the structure of traditional batteries, which feature three main parts: an anode (-), a cathode (+), and the electrolyte. In batteries, chemical reactions cause a buildup of electrons at the anode. These electrons “want” to go to the side with the opposite charge—the cathode—but they’re blocked by the electrolyte, so they travel along the circuit, powering whatever devices along the way.

But the new model works instead by intertwining anodes and cathodes in a self-assembling, 3D gyroidal structure, “with thousands of nanoscale pores filled with the components necessary for energy storage and delivery,” the Cornell Chronicle writes. Essentially, the new setup maximizes the potential space within a battery by using extremely tiny components arranged in a complex geometrical structure called a gyroid. 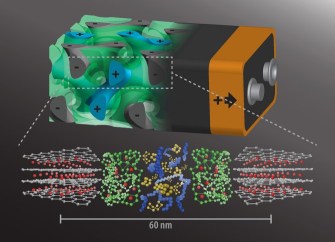 “This three-dimensional architecture basically eliminates all losses from dead volume in your device,” Wiesner said. “More importantly, shrinking the dimensions of these interpenetrated domains down to the nanoscale, as we did, gives you orders of magnitude higher power density. In other words, you can access the energy in much shorter times than what’s usually done with conventional battery architectures.”

How much shorter? Wiesner estimated that your device could be fully charged “by the time you put your cable into the socket, in seconds, perhaps even faster.”

The researchers are still working on the technology and it’s unclear when it might be implemented on a large-scale basis, but the group is currently obtaining patent protection.

Why don’t we have ultra-efficient batteries yet?

It’s not for lack of trying. For years, engineers have been searching desperately for ways to boost battery efficiency. It’s been a relatively slow process. The main hold-up lies in the limits of rechargeable lithium-ion batteries.

Specifically, the graphite-based anodes within these batteries can only hold so many lithium ions. That’s why many companies now make anodes based on silicon, a material with a much higher carrying capacity. It hasn’t been easy. Silicon swells during charging, so scientists have had to modify the material to make it stable enough to power cell phones and other devices without destructing.

One factor that will likely help improve battery technology across the board is the steadily falling cost of hardware. Since 2012, the price of lithium-ion modules has decreased by 70 percent, and analysts predict prices will continue to drop.

The Ring Is A Lie: Ring Nebula Not A Ring After All

This image is a composite of the Ring Nebula (Messier 57). This combines new Hubble Wide Field Camera 3 data with observations of the nebula’s outer halo from the Large […]