In 2017, a team of scientists using the High Accuracy Radial velocity Planet Searcher (HARPS) at the La Silla Observatory in Chile discovered Ross 128 b, an Earth-size exoplanet orbiting a star 11 light-years away from our solar system. It was proposed then that the exoplanet could be habitable, given its similarities to Earth.

Now, a new study published in the Astrophysical Journal Letters provides even more reason to think Ross 128 b, the second closest exoplanet to Earth, could harbor life.

A team of scientists led by Diogo Souto of Brazil’s Observatório Nacional set out to learn more about the exoplanet by observing Ross 128, the star it orbits. Ross 128 is a red dwarf star, a type much smaller and cooler than our sun.

“Until recently, it was difficult to obtain detailed chemical abundances for this kind of star,” Dr. Souto said.

This information provides clues about the star’s exoplanet. That’s because exoplanets are formed from a disk of gas and dust that rotates around young stars. 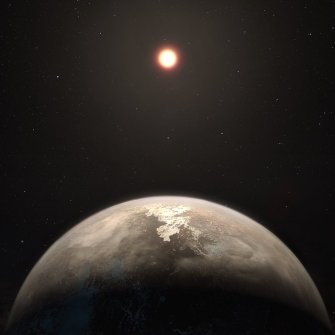 “The star’s chemistry can influence the contents of the disk, as well as the resulting planet’s mineralogy and interior structure,” Carnegie Science, whose Johanna Teske participated in the study, wrote. “For example, the amount of magnesium, iron, and silicon in a planet will control the mass ratio of its internal core and mantle layers.”

The team found that Ross 128 has iron levels similar to the Sun. Based on the star’s ratio of iron to magnesium, the researchers were able to estimate its probable mass and radius. These measurements allowed them to determine that Ross 128 b likely has a rocky surface.

The observations also suggest that, though the exoplanet is 20 times closer to its star and takes just 9.9 days to orbit it, Ross 128 b probably has a temperate climate. This puts it in the Goldilocks Zone, which describes a range of distance from a star in which temperatures are just right—not too hot, not too cold.

“Get too close to the star, and the heat will eventually boil off the oceans,” Abel Mendez, planetary astrobiologist and professor at the University of Puerto Rico at Arecibo, told Forbes. “Get too far away, and temperatures go so low that even if there’s water, it’s frozen.”

Currently, astronomers have identified more than 50 exoplanets that seem to have the conditions necessary to support life.

“It’s exciting what we can learn about another planet by determining what the light from its host star tells us about the system’s chemistry,” Souto said. “Although Ross 128 b is not Earth’s twin, and there is still much we don’t know about its potential geologic activity, we were able to strengthen the argument that it’s a temperate planet that could potentially have liquid water on its surface.”

The master and slave moralities: what Nietzsche really meant

Nietzsche had some harsh things to say about the worldview of the masses, but what did he really think?