As unpredictable as the current U.S. Presidential elections have been, a striking historical sidenote lies in their connection to the famous Serbian inventor Nikola Tesla.

A few days after Tesla died on January 8th, 1943, his possessions were seized by officials from the amazingly-named government Office of Alien Property. About 3 weeks after that, all of Tesla’s things and documents were given a thorough examination by a group of FBI agents that included none other than John G. Trump, the uncle of the current Republican candidate for U.S. President Donald J. Trump.

Trump’s uncle was, by all accounts, a very accomplished and intelligent man, an M.I.T. Professor of Engineering, who helped design X-ray machines for cancer patients and did radar research work for the army during World War 2.

Tesla’s “thoughts and efforts during at least the past 15 years were primarily of a speculative, philosophical, and somewhat promotional character,” but “did not include new, sound, workable principles or methods for realizing such results.”

But such official dismissal of the significance of the papers Tesla left behind understandably did not sit well with many folks throughout the next 73 years. As if the government would be willing to admit that it found plans for, let’s say, the Death Ray that Tesla was working on in the last years of his life. That kind of situation is ground zero for conspiracy theories.

The papers have partially been released but are still really hard to track down. What became of Tesla’s most secret tech is still potentially a mystery if you are inclined to believe that sort of thing.  Who has the papers? Did Tesla really develop the Death Ray?

Donald Trump himself often refers to his Uncle, invoking John Trump’s intelligence as a sort of voucher for his own genetic and historical pedigree.

“My uncle used to tell me about nuclear before nuclear was nuclear,” Trump said in one interview, according to the New Yorker magazine.

This would likely be referring to hydrogen bombs rather than the first nuclear bombs as Trump was born in 1946, after the Atomic Age was already upon us. 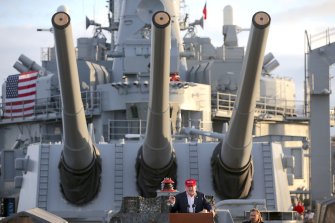 Trump also recalled to the Times how the uncle “would tell me many years ago about the power of weapons someday, that the destructive force of these weapons would be so massive, that it’s going to be a scary world.” Certainly, expected talk from someone entrusted by the government to look into game-changing, doomsday weaponry.

John G. Trump’s brilliance and his connection to the intellectual history of the country make him, in Trump’s view, a kind of guarantee that he himself is smart.

As he mentioned to the Boston Globe:

“My father’s brother was a brilliant man . . . We have very good genetics.”

Similarly, he told to NBC about his uncle to point out that:

Nikola Tesla’s other remarkable connection to this election cycle lies in his vision for the future of the women in this country. As many of Tesla’s technological predictions have come true, it’s inevitable that his societal prognostications are of interest, especially as they mirror remarkably the current reality.

In an interview, published with the dramatic title “When Woman Is Boss”, Tesla talked extensively of a coming future world where women would find equality and, in fact, surpass males in intelligence and power. He somewhat lamented this last part, thinking women would lose their femininity.

It’s unclear, in general, how much of a place women had in the unmarried Tesla’s life. By all accounts he was somewhat of an asexual being, focused solely on the mind work. 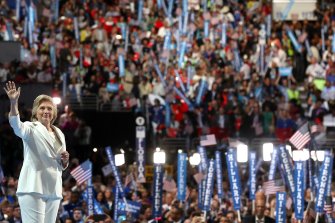 Democratic presidential candidate Hillary Clinton acknowledges the crowd at the end on the fourth day of the Democratic National Convention at the Wells Fargo Center, July 28, 2016 in Philadelphia, Pennsylvania.  (Photo by Aaron P. Bernstein/Getty Images)

Here’s what Tesla said about America that sounds very much like ours, with the first-ever nominated female candidate for President in Hillary Clinton:

“This struggle of the human female toward sex equality will end in a new sex order, with the female as superior.  The modern woman, who anticipates in merely superficial phenomena the advancement of her sex, is but a surface symptom of something deeper and more potent fermenting in the bosom of the race.

“It is not in the shallow physical imitation of men that women will assert first their equality and later their superiority, but in the awakening of the intellect of women.

“Through countless generations, from the very beginning, the social subservience of women resulted naturally in the partial atrophy or at least the hereditary suspension of mental qualities which we now know the female sex to be endowed with no less than men.

“BUT the female mind has demonstrated a capacity for all the mental acquirements and achievements of men, and as generations ensue that capacity will be expanded; the average woman will be as well educated as the average man, and then better educated, for the dormant faculties of her brain will be stimulated to an activity that will be all the more intense and powerful because of centuries of repose.  Woman will ignore precedent and startle civilization with their progress.

“The acquisition of new fields of endeavor by women, their gradual usurpation of leadership, will dull and finally dissipate feminine sensibilities, will choke the maternal instinct, so that marriage and motherhood may become abhorrent and human civilization draw closer and closer to the perfect civilization of the bee.”

Maybe the last part there about our society turning into a “perfect civilization of the bee” seems far-fetched at this point. But give it a few years.

The most contentious election in American history happened in 1876

The 2020 election cycle is not yet as wild as the 1876 election that made Rutherford B. Hayes president.
The Present

States set their own voting laws, so where does this make voting easiest?
The Present

Why Catalonia Will Never Get Rid of Spain

The map of Spain is tattooed into the Catalan landscape, as indelible streets and avenues