It’s a dubious honor, but humanity has managed to amass a giant trash mass about twice the size of Texas, or three times the size of France, or about 1,600 miles.

The actual area itself is hard to measure, due to several factors. First, the trash itself isn’t exactly the kind of thing you could walk over — it’s more like a “trash soup” according to the Smithsonian. Compacted, by at least one estimate, it would be approximately 234 square miles, or roughly the size of the city of Chicago. But since the make-up of the island is comprised of so many items, the area of the vortex itself manages to spread out about twice the size of Texas, or 3x the size of France.

There are about 1.8 trillion pieces of plastic (mostly broken-up pieces of shopping bags), which account for 94% of the trash yet only about 8% of the actual mass itself. The biggest culprit appears to be discarded fishing nets, which make up about half of the mass, and 20% of the remaining amount is debris directly from the 2011 Tōhoku earthquake off of the coast of Japan.

But we may never know exactly how big the trash patch is, unfortunately, because we don’t know how deep the trash patch goes. It’s massive, and environmentalists are worried that it will only get bigger. At our current rate of consumption and trash accumulation, the Great Pacific Garbage Patch could become 3x bigger in just three decades. That’s a lot of plastic. And considering how much the fish in the Pacific are eating the plastic, it’s only a matter of time until it makes its way up the food chain to us and affects humans. After all, 93% of Americans have detectable levels of bisphenol A in their bloodstreams. That percecntage, and the amount of plastic, is only going to grow. 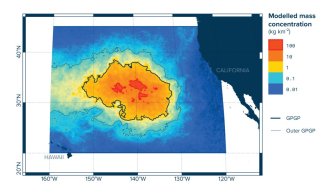 How is the gender pay gap calculated?

A look at the United States gender gap in 2018 shows that no matter how it’s calculated, it’s still a problem.