In the US, 50% of men and 60% of women go through a traumatic event in their lifetime. Among them, about 7-8% experience PTSD. What experts have been wondering is, why do some people develop PTSD while others don’t?

Most of the studies surrounding the effects of trauma have focused on the brain. But there’s another body region that may play just as pivotal a role, the gastrointestinal tract. Where trauma is concerned, gut bacteria in the microbiome may play an important role in whether one develops PTSD or not. That’s according to a new study by researchers at Stellenbosch University in South Africa and colleagues at the University of Colorado, Boulder. Their results were published in the journal Psychosomatic Medicine.

Previous research has shown that other factors, besides experiencing a life-threatening trauma, contribute to the development of PTSD. These are negative childhood experiences, genetic makeup, and current living conditions. What researchers wanted to know is, whether or not chronic inflammation in the body might play a role.

Trillions of different kinds of bacteria inhabit our gut, some helpful, others harmful, and others still neutral. In recent years, medical science has discovered that colonies of helpful gut flora contribute to a variety of crucial processes such as those having to do with the immune system, metabolism, digestion, and even brain chemistry. These bacteria help us to metabolize food and drugs, fight off infection, and even produce hormones and neurotransmitters to help us keep emotionally balanced. 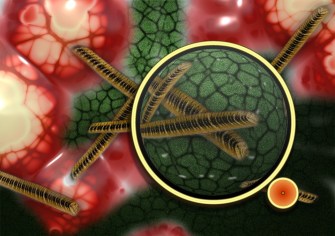 Scientists in recent years have found that gut bacteria also play a role in a number of physical and psychiatric conditions, including depression and multiple sclerosis (MS). It all surrounds stress. Stress hormones affect the bacteria of the microbiome, impacting their growth. This in turn can damage the intestinal lining, allowing toxins and bacteria into the system, which causes inflammation, which has been implicated in a number of diseases and disorders.

What this team found was markers for inflammation that can predict whether or not recent trauma victims are likely to develop PTSD somewhere down the line. Researchers compared the gut bacteria of 20 volunteers who suffered a significant trauma. 18 had been diagnosed with PTSD. The other 12 weren’t and served as a control group. Though overall, the diversity of the microbiomes of both groups was similar, the levels of certain species of flora differed widely.

Dr. Stefanie Malan-Muller was the lead researcher on this project. She’s a postdoctoral fellow in psychology at Stellenbosch University. Dr. Malan-Muller said, “We identified a combination of three bacteria (Actinobacteria, Lentisphaerae and Verrucomicrobia) that were different in people with PTSD.” These are known to help regulate the immune system. Those with PTSD had substantially lower levels of these species, which led researchers to believe that it might be inflammation that contributes to whether one develops PTSD or not. 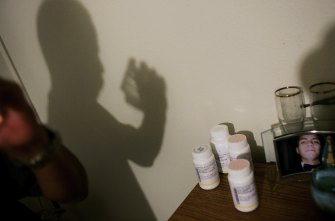 PTSD Sufferers are given a host of medications. This research hints at other possible treatment options. Credit: Getty Images.

Researchers also found that a decrease in the level of two specific gut flora (Actinobacteria and Verrucomicrobia) were related to suffering a childhood trauma. This is interesting since we often find those who’ve gone through such a trauma are more likely to be diagnosed with PTSD later on.

“These changes in the gut microbiome possibly occurred early in life,” Dr. Malan-Muller said. “We therefore hypothesize that the low levels of those three bacteria may have resulted in immune dysregulation and heightened levels of inflammation in individuals with PTSD, which may have contributed to their disease symptoms.” Though this research established correlation, it does not prove causation. Was it that PTSD susceptibility contributed to lower levels of certain gut bacteria, or vice-versa?

Factors influencing susceptibility and resilience to developing PTSD are not yet fully understood, and identifying and understanding all these contributing factors could in the future contribute to better treatments. Especially since the microbiome can easily be altered with the use of prebiotics (non-digestible food substances), probiotics (live, beneficial microorganisms), and synbiotics (a combination of probiotics and prebiotics), or dietary interventions.

To find out what PTSD does to the brain, click here:

Though the sample size was small, the results are compelling.