Our celestial companion in the midnight sky has been a constant source of wonder and awe. From anyplace on the planet, the brightest thing in the night sky is usually the moon. The moon is our only natural satellite and one of the nearest astronomical bodies at around 240,250 miles or 384,400 km away. The moon has a radius of 1079 miles and is approximately 27% the size of the Earth. SImilar to the Earth, the moon has a crust, mantle, and core. It’s thought that it may have an iron core as well. This dark muse has had a rich and storied past both historically on a universal geologic scale and for the human race. Many ancient cultures revered the moon as a god or goddess. Going by names such as Selene and Luna, the moon has captivated many and still does to this day. It’s an astounding part of Earth’s system.

Before life and the biosphere struck this rock billions of years ago, the solar system was a place of chaotic creation. The sun spun from its spindle flame and released the planets forming the early solar system in the process. But it wasn’t until a few hundred million years later that the Earth’s moon would come to exist. There are a few theories for how the moon popped into orbit around our planet.

One of the prevailing ideas supported by the scientific community is the giant impact hypothesis, which suggests that the moon was formed when a large astral body slammed into Earth. The early solar system was a churning pool of formation and there were many numbers of early bodies that never made it to planetary status.  It is thought that one of these smashed into Earth in its early years.

Astronomers call this object, Theia, which was as large as Mars when it collided with the Earth. After the collision, vaporized slabs of the planet were launched into space where gravity then assembled them together over the years to eventually form the moon. This would explain why the moon is made of lighter elements and less dense than Earth. As the material was being bound together by gravity, it would have centered near the ecliptic plane and began its orbit that it’s still on today.

On the subject of the explosive power felt on our humble planet, NASA stated:

“When the young Earth and this rogue body collided, the energy involved was 100 million times larger than the much later event believed to have wiped out the dinosaurs.”

Before life was even a universal thought to the first primitive man gazing at the stars, the moon has been one of the most fascinating places near our Terra home.

An ancestral beacon over mankind

In the year 100, Plutarch posited that there were other human civilizations living on the moon. As our astronomical views began to mature and grow, we went from believing Ptolemy’s view that the moon and sun orbited Earth to the correct view of Nicholas Copernicus – who developed the correct view that the Earth and other bodies in the solar system revolve around the sun.

Eventually, we’d gaze to the stars and moon with a telescope. Galileo first saw a new image of ragged craters and mountains. He watched as the month changed how the mountains cast their shadows and calculated their height. Eventually, Galileo’s observations would contribute to the rejection of old astronomical ideals and would replace the Earth-centered model of the universe.

He also, of course, explained that the light regions were rough and hilly areas while the dark regions were plains. Other astronomers throughout the years began to catalog every part of the surface they could see. More powerful telescopes led to these new detailed records. In 1645, the first full map was published by Dutch engineer Michael Florent van Langren. Another Bohemian Italian astronomer Anton M.S. de Rheita also drew up a map. It was by 1651 that the finalized map of the moon would be completed by two Jesuit scholars, Giovanni Battista Riccioli and Francesco M. Grimaldi.

Our long and fruitful observation of the moon would finally culminate in us first stepping on its surface in the 20th century. 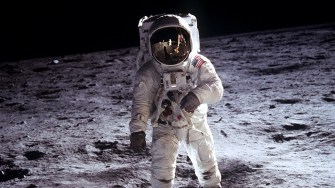 That’s one small step for man, one giant leap for mankind

Exploration of the moon in its many forms from robotic probes to men on the moon has taught us a great deal about our solar system and even ourselves. Our first visitors to the moon were robots that came in the wake of Sputnik 1 in October 1957. The Soviets were able to fly their Luna 1 past the moon in January 1959. This was followed by a number of probes that were eventually able to take photographs of the other side of the moon. Many surprises would come from these expeditions, like for example that the dark side of the moon didn’t have many smooth plains.

Not to be outdone, America’s space program called to the task of putting a man on the moon was ushered in. With some of the greatest engineering talent and know-how at the time assembled, we were able to manage the inconceivable and walk on the moon. In the span of eight years, Apollo had become the sole powerhouse of manned spaceflight.

In 1968 during the Christmas season, Apollo 8 left the orbit and first reached the moon where they circled it for a day’s time. Here we gazed upon this legend and saw it devoid of life and gray. After being only 62 miles from the surface, NASA planned on journeying back to the moon and landing on its surface. In May of 1969, Apollo 10 orbited the moon and tested the new lunar lander without humans. These many missions paved the way as we grew our knowledge of lunar geology.

In a climatic descent spurned by computer malfunctions and frozen fuel lines, Neil Armstrong and Buzz Aldrin of Apollo 11 would be the first humans to land on the moon in Mare Tranquillitatis or the (Sea of Tranquility). July 20th, 1969 we had first landed on the moon. The two of them walked on the moon for 2 hours and began collecting rocks and soil samples. We learned a great deal about the moon. Most of the dark spots or dark maria were ancient volcanic lava streams that crystallized billions of years ago. We also found that lunar samples were similar in composition to rocks found on the Earth. New ideas like the formation of a magma ocean on an early rocky planet were founded as well.

We would go on to continue visiting the moon in the early 70s. Our landing zones can all be found on online. These are the approximate times that each Apollo landing becomes illuminated by the Sun.

A return to stay permanently next time

A lot of factors contributed to the Apollo missions and future expeditions to the moon stopping. It’s been a real shame that we haven’t returned. But it seems that as of late the new space age is rising up again in our dreams. We can’t escape the space migration tuning in signals that the explorer human-race is known so much for.

Many private companies and even national agencies think that when we return to the moon (which is an inevitability,) we should stay there permanently this time. The moon still holds dreams for mankind. We may, one day, conduct commerce in lunar orbit and among new permanent space habitats nestled in craters. We’ll have gone from voyeuristic onlookers of this mighty deity-like moon to being its custodians of the new age.

Throughout history, mankind has often been enthralled by stories of mythical places, cities, and paradises shrouded in secrets and lost to the sands of time. Here are the 7 most famous mythical places in the world.