Richard Feynman was one of the most interesting people of the 20th century. A physicist who helped build the atom bomb, won the Nobel Prize, wrote several books, explored every fundamental force, was a beloved teacher, player of bongo drums, buster of pseudoscience, and public intellectual; there are few people with more awesome biographies.

If you don’t know about him go read about him right now; if you haven’t read his books go check one out at your local library after you read this.

But in our rush to admire his great achievements and the exciting public aspects of his life, we can easily overlook the other areas that are less flashy. These areas are often the ones that offer us the most substantial insights into who he was. 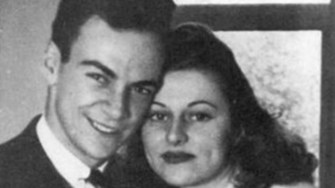 Feynman married his high school sweetheart Arline in 1942, after her diagnosis with terminal tuberculosis. They had a happy, if existentially dreary, marriage for just under three years. On June 16th, 1945, Feynman was called away from Los Alamos where he was working on the Manhattan Project to be at his wife’s side as she died.

A year and a half after her death, he wrote her a letter. Discovered only after Feynman’s death in 1988, during James Gleick’s research for the book Genius: The Life and Science of Richard Feynman, the letter gives us a tremendous insight into his personal life and thought process.

October 17, 1946
D’Arline,
I adore you, sweetheart.
I know how much you like to hear that — but I don’t only write it because you like it — I write it because it makes me warm all over inside to write it to you.
It is such a terribly long time since I last wrote to you — almost two years but I know you’ll excuse me because you understand how I am, stubborn and realistic; and I thought there was no sense to writing.
But now I know my darling wife that it is right to do what I have delayed in doing, and that I have done so much in the past. I want to tell you I love you. I want to love you. I always will love you.
I find it hard to understand in my mind what it means to love you after you are dead — but I still want to comfort and take care of you — and I want you to love me and care for me. I want to have problems to discuss with you — I want to do little projects with you. I never thought until just now that we can do that. What should we do. We started to learn to make clothes together — or learn Chinese — or getting a movie projector. Can’t I do something now? No. I am alone without you and you were the “idea-woman” and general instigator of all our wild adventures.
When you were sick you worried because you could not give me something that you wanted to and thought I needed. You needn’t have worried. Just as I told you then there was no real need because I loved you in so many ways so much. And now it is clearly even more true — you can give me nothing now yet I love you so that you stand in my way of loving anyone else — but I want you to stand there. You, dead, are so much better than anyone else alive.
I know you will assure me that I am foolish and that you want me to have full happiness and don’t want to be in my way. I’ll bet you are surprised that I don’t even have a girlfriend (except you, sweetheart) after two years. But you can’t help it, darling, nor can I — I don’t understand it, for I have met many girls and very nice ones and I don’t want to remain alone — but in two or three meetings they all seem ashes. You only are left to me. You are real.
My darling wife, I do adore you.
I love my wife. My wife is dead.
Rich.
PS Please excuse my not mailing this — but I don’t know your new address.

For those of you who might get more out of it read aloud, here is Oscar Issac reading it. Notice how hard he is working to not cry at the end.

Why would he write this?

Given how hyper-rational Dr. Feynman was during his life, the fact that he wrote a letter to a dead person stands out as rather odd. A very obvious explanation comes to mind immediately.

Did he think there was an afterlife? That some incarnation of his late wife Arline could read it?

Feynman was an atheist since his youth and was so undisposed to mystical thinking that he even devised a rational explanation for why the clock in the hospital room where his wife died stopped at the exact time of her death, it stopped when it was handled to record the time.

He knew he was the only person who would read this letter.

Then why did he write it?

He wrote it to feel better.

The letter reflects no belief that his wife still existed as anything but a memory but is instead a look into the grieving mind of a genius. This letter reminds us that Feynman wasn’t made of stone, that he had been hurt, and that he was human.

If nothing else, this letter helps us understand that great scientists aren’t machines. We tend to imagine the lone genius sitting in their ivory tower cranking out papers that change our understanding of the cosmos without thought to the details of life. We see here that this view is mistaken.

It also reminds us that its okay to be sad, its okay to grieve, its okay to do things that don’t make sense in order to feel better. Feynman himself admits that he thought “there was no sense to writing” the letter before acknowledging that it is the right thing to do and explaining how it can help him process his emotions.

Feynman later remarried, divorced, and was married again—all of which took place in the shadow of his first, tragic marriage.

Richard Feynman was a great scientist. This letter helps us to remember that he was also a great man. He loved, lost, and mourned like the rest of us. In times of sorrow, it can remind us that we are not alone or worth any less for feeling this way. It also shows us that even after such a tragic loss we can go on to do great things and be happy again, as Feynman did.

You can read more letters from Feynman in the book Perfectly Reasonable Deviations from the Beaten Track.

A new study reveals the most popular conspiracy theories believed by Russians.