Carl Jung believed dreams represent archetypal realities obscured during waking consciousness. Dreams reveal more than they conceal, he wrote, countering Freud’s idea that subconscious movies were by design secretive. Dreams are an integral component of Jung’s theory of individuation, in which our conscious and unconscious lives are integrated.

In Jungian philosophy, the conflict and chaos experienced in dreams ultimately bring order to our lives. While Jung’s more mystical theories are debatable given our current knowledge of neuroscience, he was not mistaken about the importance of dreaming. As it turns out, their absence is terrible for our health.

Rowan Hooper, the managing editor at New Scientist, reports that chronic dream deprivation is damaging our waking hours in numerous ways. As I wrote about last year, 40 percent of Americans get less than seven hours of sleep every night; Hooper claims that number is 60 percent in the UK.

This trend is wreaking havoc on our immune and metabolic systems, leading to a variety of diseases and obesity. Forget about focus: the devices that keep us up late at night are ruining our sleep patterns, which has long-term consequences on our memory system. One study showed that denying mice adequate amounts of REM sleep, the cycle in which we dream, the mice couldn’t consolidate memories.

We might think this is just a sleep problem, but dreaming is inseparable from our nighttime sojourn through the darkness. Dream problems and sleep problems go hand in hand. We sleep in cycles, each lasting about 90 minutes; we go through three cycles before hitting REM. The longer we sleep, the more time we spend in REM, which is why we are often dreaming when waking up in the morning. If we sleep less than seven hours, however, it becomes harder to achieve this level of REM. 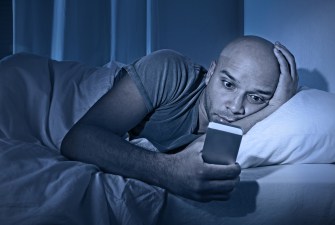 This makes us more than a little groggy. As Hooper writes, sleep problems and digestive issues are also related. Besides mood disorders, missing sleep raises our stress level during the day, which affects how we digest food. The digestive process is interrupted when we don’t get the proper amount of shut-eye.

Hooper points out a connection between the digestion of food and the digestion of emotions. Memory consolidation is a critical reason for dreaming at all. The combination of sleeping and dreaming acts as an emotional stabilizer. We’re able to integrate the day’s events in a place where, physically speaking, we’re vulnerable—our ancestors didn’t have locks on their doors. Incredibly, we heal from emotional trauma more quickly when we sleep, and dream, properly.

Except we’re not getting enough sleep to cycle through the stages to take advantage of this circadian anti-depressant. Instead, we get depressed and turn to substances like alcohol and pharmaceuticals to nod off. This only makes things worse. Even one drink delays REM—forget about getting drunk. Your sleep is ruined. Antidepressants promote deep sleep at the expense of REM, which also disrupts our dream cycles.

We’re currently fighting many epidemics: the opioid crisis; the increasing wage gap between top earners and everyone else; homelessness; soaring anxiety and depression rates; an epidemic of a lack of common sense. One 2012 study declared that we’re in the midst of a sleep epidemic as well.

We’re paying for this lack of dreaming in numerous ways, including creativity. One 2009 study stated, “Compared with quiet rest and non-REM sleep, REM enhanced the formation of associative networks and the integration of unassociated information.” Volunteers that experienced more REM sleep were better equipped for solving problems requiring creative solutions.

Hooper writes that dreams that include an “emotional core” appear to be a main function of REM sleep. He continues,

You might dream about a hard decision, and the brain monitors your emotional response to it. The next day, your ability to make the decision is easier: you have “slept on it”. This phrase or similar exists in most languages, by the way.

He concludes that we should scrutinize sleep patterns as seriously as we do diet and exercise habits. I devoted a section to this idea in my last book: regeneration and restoration are primary components of optimal health. You can’t train your body for cardiovascular and physical strength without including regenerative practices like fascia release, stretching, meditation, and, crucially, sleep. Not only do your intense workouts suffer, so do the most important systems in your body. The antidote to an overstimulated culture is available every single evening, but you have to take advantage of it.

As with finding the motivation to hit the gym, we need to motivate ourselves to get to bed earlier, without screens or other technological stimulation right before trying to slip into sleep. When disease strikes we often act surprised as if it “came out of nowhere.” That is simply not true. We age every day. The less attention we pay to the simple biological patterns we need to honor, the more we suffer as time rolls on.

Finding meaning in life is impossible without dreams. As Jung recognized, unconscious dreams affect our conscious ability to manifest the target of our ambitions. To thrive we need all the energy we can muster. There is a space in which our daytime and nighttime dreams converge, but you have to practice both in order to discover it.

The U.S. military has a weapon that can create human speech out of thin air

The non-lethal weapons lab of the military unveils a futuristic weapon that can create speech and heat out of thin air dozens of miles away.