If you take a look up at the early morning sky on Saturday, March 31, you will see the last blue moon for the next two and a half years. It peaks at 08:37 a.m. Eastern time in the U.S.

A blue moon as it’s defined today is the second full moon in a given month; the last was the so-called ‘super blue bloodCr̶a̶z̶y̶ ̶M̶e̶l̶t̶i̶n̶g̶ ̶H̶u̶g̶e̶  moon’, on January 31 of this year.

The phrase used to refer to an extra moon during a season’s cycle, but language always evolves and this phrase has, too. So, in 2018, a full moon on March 2, and again on March 31? Blue moon. 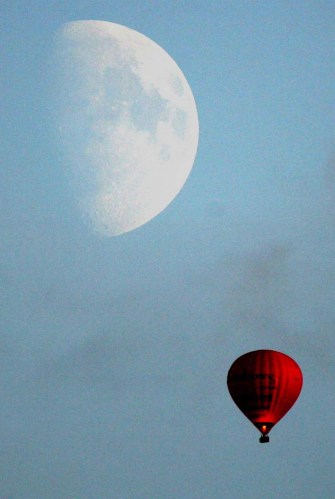 It’ll be your last chance to see one until Halloween 2020 when the next blue moon happens—and what a great day of the year for that to occur! Despite the name, it will not be the hue of blue.

The phrase “once in a blue moon” has been around for more than 400 years. In a 2012 article in Sky & Telescope magazine, folklorist Philip Hiscock of the Memorial University of Newfoundland explained that the earliest use of term indicated something absurd:

“In fact, the very earliest uses of the term were remarkably like saying the Moon is made of green cheese. Both were obvious absurdities, about which there could be no doubt. ‘He would argue the Moon was blue’ was taken by the average person of the 16th century as we take ‘He’d argue that black is white.’

The concept that a blue Moon was absurd (the first meaning) led eventually to a second meaning, that of ‘never.’ The statement ‘I’ll marry you, m’lady, when the Moon is blue!’ would not have been taken as a betrothal in the 18th century.”

NASA clarified the lunar term in a 2012 article. “Most Blue Moons look pale gray and white, indistinguishable from any other moon you’ve ever seen. Squeezing a second full moon into a calendar month doesn’t change the physical properties of the moon itself, so the color remains the same.” Not the first time NASA has slightly sardonically explained the facts.

However, true blue-hued moons have happened; when volcanoes erupt, they can show themselves. Krakatoa in 1883, Mount St. Helens in 1980, El Chichon in 1983, and Mount Pinatubo in 1991 all caused a blue-shaded moon in parts of the world. This happens because some of the ash particles are one micron wide, about the same wavelength as red light. This scatters the red light, allowing blue light to pass through. Some large forest fires can achieve the same effect.

So, particulates in the air, a clear sky, and voila! Blue moon.

Now if you’ll excuse me, I’m about to crack a Blue Moon of my own and watch the heavens.

Diamonds can be formed in one of four fascinating ways.