In 1784, American inventor Benjamin Franklin and French chemist Antoine Lavoisier were tasked by the Académie des Sciences to study the efficacy of mesmerism, the notion that invisible forces exerted by animals provide therapeutic relief in humans. The claim, made by German physician Franz Mesmer, was quickly put to rest with this investigation. No, animal spirits do not influence human biology.

During their studies Franklin and Lavoisier inadvertently discovered a peculiar aspect of human psychology and physiology: the placebo effect. As biographer Richard Holmes writes in The Age of Wonder regarding the increased health of patients who were not actually receiving active ingredients, “It was simply because the patients believed they would be cured.”

It wasn’t until the 1970s that Rabi Simantov and Solomon Snyder discovered endorphins, endogenous opioid neuropeptides produced by our pituitary gland and hypothalamus that bind to morphine receptors, which is the cause of the placebo response. We’ve reaped the advantages of this natural pain and anxiety relief for eons. The placebo response is why many alternative therapies “work.”

One such alternative therapy is homeopathy, which has recently been put to task by American governing agencies. In 2015, the FTC cracked down on speculative claims advertised on homeopathic packaging, while last month the FDA announced it would be regulating high-risk homeopathic products.

The UK-based Royal College of Veterinary Surgeons (RCVS) also now recommends veterinarians use caution when employing homeopathic products. Considering there is no evidence of a placebo response in any other animal, and that so far the only means for homeopathy to work in humans is by this response, the council overwhelmingly felt using such products is not humane. The statement read:

The statement continues by reminding vets that the welfare of animals under their care should be foremost on their minds. Since there is no credible proof homeopathic remedies work, they should not be employing these substances in their treatments.

While the council has not banned veterinary homeopathy, nor even suggests it, holistic vets responded by claiming an infringement on their rights. Chris Day, president of the The British Association of Homeopathic Veterinary Surgeons, called it a “de facto ban.”

This is an attack on freedom of choice for clients and on the clinical freedom of vets. We are deeply disappointed that the RCVS would seek to undermine its own members whose independence and livelihoods are at stake.

It’s challenging trying to make sense of homeopathy’s efficacy as promoted to treat animals. Consider a concoction designed for diarrhea and gas in dogs and cats. Among the active ingredients are Nux Vomica, from the highly poisonous strychnine tree, which, diluted to the homeopathic rating of 6c means there’s one part strychnine per ten trillion parts sugar water; Thuja Occidentalis, derived from the cedar tree, which, while rich in vitamin C, is predominantly used in insecticides, cleansers, disinfectants, and soaps, and contains a neurotoxic compound, thujone; and Argentum Nitricum, silver nitrate, a popular homeopathic remedy for anxiety with no proven health benefits and lethal in high doses.

That’s only one-third of the ingredient list for that particular concoction; the others do not hold up to scrutiny either. By aligning itself with the “natural” and “holistic” edge of healthcare, homeopathic products take advantage of our general ignorance of compounds and dilution rates. Most homeopathic remedies are quite safe because there’s little to no active ingredients inside of the bottle. The leap to calling it “therapeutic,” however, is inexcusable, a fact more governing agencies are acknowledging. 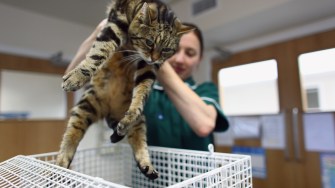 Senior Vice President of the RCVS Chris Tufnell is particularly concerned with the use of homeopathic nosodes which are sugar-coated homeopathic vaccination pills containing trace amounts of diseased tissue or discharge from a sick animal. “I have seen dogs die from completely preventable conditions such as parvovirus, which is extremely unpleasant and preventable,” he said to The Sunday Telegraph. “It’s entirely unnecessary.” Homeopathic painkillers are another concern in the scientific community, as animals are often left in tremendous pain if their owners opt for alternatives to painkillers for their pets.

Our interaction with other species is always fraught with danger. For example, credible researchers always take studies on mice with a grain of salt. While their DNA is remarkably similar to ours, until tests are performed on humans there is no way to ensure efficacy on our biology. The reverse is also true: believing our remedies are applicable to other species is unsound.

Not that there aren’t cross-species solutions. Recently, one of my cats was having bowel problems. My wife and I started mixing fiber into his diet; problem solved. Plant fibers do their job across many species; a lack of fiber in the human diet is creating serious problems. There are plenty of examples of such substances working in different animals.

Homeopathy is not one of them. We’ve evolved an incredible healing system with natural opioids in which psychology and physiology work by unconscious processes. The RCVS recommendation isn’t a civil rights issues; it’s an animal welfare issue. Doctors treating animals should uphold the same oath demanded of human doctors. That starts with evidence.

Derek Beres is the author of Whole Motion: Training Your Brain and Body For Optimal Health. Based in Los Angeles, he is working on a new book about spiritual consumerism. Stay in touch on Facebook and Twitter.

The power of group identity: 22 percent of Americans remain skeptical of vaccines

According to this research, eight percent of Americans always refuse vaccines. Why?
Life

Are animals ‘persons’? New York court hears the case of Happy the elephant

An elephant at the Bronx Zoo has become a cause célèbre for animal rights activists.
Life

Want to feel better? Science says to care for your dog

Admit it, caring for your pet can make you happy too. Science is working on why.
Health

We may never have to get more than one flu shot again.
Health

Nigeria, which accounted for more than half of all polio cases in 2012, reported zero new cases of the infectious disease in 2017.
Up Next
Health

How you perceive your own weight may be a psychological illusion

Some people naturally believe they’re thinner than they really are. Here’s how to tell if you’re susceptible.