You know what you’re most definitely not doing enough of? Writing thank-you notes. According to a new study out of the Booth Business School at the University of Chicago, researchers say that although most people find the practice of writing a thank-you to be awkward (more on that in a bit), the people who receive them are far more appreciative than the note-maker might ever have thought.

107 students at the University of Chicago were asked to write a letter to someone who “had touched their life in a meaningful way,” expressing gratitude or thanks (out of this group of 107, 15 didn’t allow the researchers to contact the letter recipients). The students were given a questionnaire immediately before sending the note, and recipients were emailed a follow-up questionnaire two days after receiving the letter.

Both recipients and senders were asked to rank several factors—surprise about receiving the letters, surprise about content, and so forth—on an 11-point scale (0 being disappointed, 10 being highly elated). On every metric, people’s anxieties about expressing gratitude were proved wrong. Most notably, the perceived awkwardness the students had about sending the letters was entirely self-imposed, as it turns out that the people who received the letters were genuinely touched. 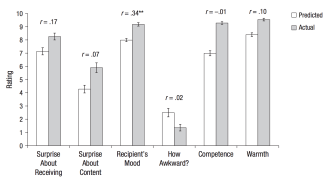 The best part? Sending letters—real life, actual, non-social-media messages—costs next to nothing and as shown by this study can verifiably make the recipient’s day better. Enough gratitude, one could posit, could make the world a measurably better place. Because what the world needs now is love, sweet love… and perhaps a whole lot of stamps and stationery.

As is shown in the graph above, it’s not awkward to thank somebody. It’s probably the best thing you could do, and it takes five minutes of your day. If you’re having trouble starting a letter, take the advice of the late, great film noir actor James Cagney: “plant yourself, look ’em in the eye, and tell the truth.”

The study itself has a surprisingly poetic conclusion, posted here:

Positive social connections are a powerful source “of well-being, and creating those connections can sometimes come at little or no cost. However, they also require that people choose to engage in actions that strengthen social bonds, such as expressing gratitude. Miscalculating the positive impact of social connections on oneself, or on others, could keep people from being prosocial enough for their own well-being. Expressing gratitude may not buy everything, but it may buy more than people seem to expect.