Ebola first emerged from what is now the Democratic Republic of Congo (DRC) (then Zaire) in 1976. It’s named after the Ebola River, which is where the outbreak began. At the time, 284 people died. Several more small outbreaks occurred in Africa over the ’80s and ’90s, garnering the attention of the medical community. Although scientists have been studying the disease for decades, its natural reservoir has never been found—meaning the animal from which it originates. The stakes weren’t that high, until 2014.

The world was gripped by the West African Ebola crisis at that time (2014-2016). It quickly spread over several West African countries, including Sierra Leone, Liberia, Mali, Nigeria, and Senegal. Over 28,000 were infected and 11,000 died. Soon, cases were reported further afield, including a handful in Spain, Italy, the U.K., and the U.S.

Note that such outbreaks haven’t ceased; on May 8 of this year, the DRC announced yet another. So far, 51 Ebola cases have been reported and 25 people have died. This is the ninth such outbreak in the country’s history. Ebola is spread through contact with infected bodily fluids. Endemic poverty and government corruption often force people in these countries to acquire bush meat to supplement their diet. Sometimes the animal they’ve captured is infected. Burial practices in this part of Africa too, where the body is carefully prepared for funeral by relatives, often causes the virus to spread.

The latest outbreak occurred in a rural area and was contained quickly. Even so, Bill Gates and others warn that a worldwide pandemic of Ebola or a similar disease could kill 30 million in as little as six months. Despite this, the U.S. and other countries are woefully unprepared. As a result, medical researchers have been scrambling to find ways to predict the timing and location of outbreaks so that they can be contained. Now, a group of researchers think they’ve found a reliable method, developed through following the migratory patterns of bats. 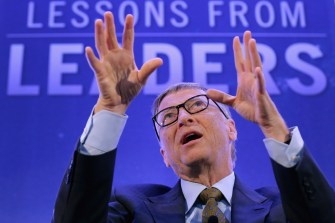 Bill Gates claims a worldwide pandemic could kill 30 million people in as little as six months, and could potentially wipe out the human race. (Credit: Getty Images.)

Bats are known carriers of Ebola. Although studies so far have not found them to be the progenitor of the virus, they still might be the source. Bats are widely consumed across Africa, with hundreds of thousands of them eaten annually. For years, scientists have said that since bats are known carriers, their migratory patterns may serve as a predictive model for the spread of the disease. Now, in a study published in the journal Scientific Reports, researchers at Lehigh University in Pennsylvania have developed a framework for such a model.

Associate professor of bioengineering Javier Buceta co-authored the study. He worked alongside Paolo Bocchini, an associate professor of civil and environmental engineering, and postdoctoral researcher Graziano Fiorillo. Buceta told Live Science, “Traditionally, scientists studying the [spread] of diseases like Ebola have operated under the assumption that the disease moves uniformly. In reality, diseases that are spread by animal hosts depend on how those hosts migrate.”

Buceta and colleagues gathered satellite data, information on seasonal changes, bat birth rates, habitat data, food availability, and bat death rates. They also looked at the infection rate of these mammals and how long it would take them to get over the disease. Researchers fed all this into a computer model or algorithm to see if they could retroactively predict hotspots for the Ebola outbreak that occurred in 2014. 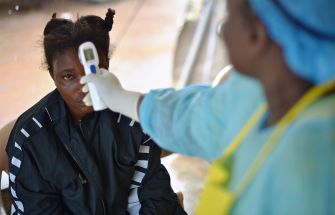 A predictive model would allow medical organizations to rush resources to a hotspot before an outbreak turns into an epidemic. (Credit: Getty Images)

We needed to study the random fluctuations of available resources over the entire African continent at high resolution; it was a massive computational and probabilistic challenge. We recognized that from a mathematical point of view, the problem is similar to the random propagation of seismic waves in a region subject to earthquakes, and we could adapt our tools.

The first case in the 2014 outbreak was a two-year-old boy in a village called Meliandou in Guinea. The Lehigh University model was able to retroactively predict the outbreak starting there. Being able to accurately predict where and when an outbreak will strike can help organizations mobilize doctors, vaccination programs, and public health campaigns where they are needed most in order to contain the outbreak before it spreads.

Though prescient, it’s also precarious. According to Buceta, “In our model, the appearance of outbreaks is tightly linked to fluctuations in environmental conditions which have an impact on both bat migration patterns and infection rates.” He added, “Such findings, strongly suggest that environmental factors play a key role in the spread of the Ebola virus among bats.” As a result of their breakthrough, Buceta and colleagues have received a grant from the National Institutes of Health (NIH) to further develop their model. They should be able to use it in many different countries, and be able to track other potential pandemic-causing diseases, as well.

To learn more about the efforts to contain the next great Ebola outbreak, click here:

How to Integrate Mindful Business Practices in the Workplace

Mindfulness at work has been picking up traction in western businesses and organizations in recent years. Major companies like Google, General Mills, Apple, Intel, and Nike are embracing mindfulness in […]