We live inside a galaxy-wide zombie, says a fascinating new study. Our galaxy, the Milky Way, has apparently had quite an eventual life, “dying” once before. This is according to calculations by the Japanese astronomer Masafumi Noguchi of Tohoku University.

Noguchi looked at the history of the Milky Way over a period of 10 billion years. He wanted to explain the mystery of why the stars of the Milky Way can be split into those that are rich in the “alpha” elements like oxygen, silicon and magnesium, and those that are overflowing with iron. The astronomer created a model that shows the existence of two separate periods of star formation.

The model utilizes the theory of “cold flow accretion,” proposed in 2006 by Avishai Dekel and his colleagues from The Hebrew University. Also central to the model is the fact that the chemical composition of stars can tell us about the gases that formed them. Stars essentially memorize the amount of the elements at the time they were being created.

Noguchi showed that during the first period of formation, streams of cold gas came into the galaxy from the outside, leading to the creation of the first stars. Fast-forward a few million years and some of these stars exploded as supernovas, creating a large number of alpha elements. These, in turn, made their way into gas and got incorporated into other stars.

But around 7 billion years ago, shock waves heated the gas so much that its flow into our galaxy stopped. This also ceased the star formation process for the next 2 billion years. This “dormant” period was notable for long-lived star explosions, which pumped iron into the gas, changing its composition.

About 5 billion years ago, the gas cooled enough and the second generation of stars started to form, including our sun. This new crop of celestial objects was also much richer in iron. 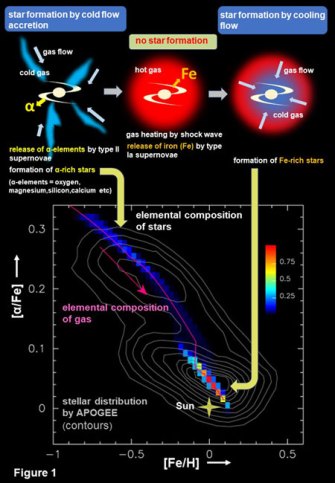 This diagram shows the two stages of star formation in the Milky Way galaxy according to Noguchi. In upper illustration, blue (cold) and red (hot) show gas. The color map on the bottom shows the distribution of the elemental composition of stars calculated by Noguchi’s model where the purple line indicated how the elemental composition of the gas changes over time (Credit: M. Noguchi, courtesy of Nature). Overlaid contours show the distribution of solar neighborhood stars observed by APOGEE, a spectroscopic device attached to the 2.5 m telescope of the Alfred P. Sloan Foundation at Apache Point Observatory in New Mexico (Credit: M. Haywood et al. A&A, 589, 66 (2016), reproduced with permission © ESO).

In corroboration of Noguchi’s theory about the Milky Way, previous research has shown that our neighboring Andromeda galaxy also created stars in two stages. Similarly, that process featured a long quiet period in between.

While Noguchi expects that massive spiral galaxies like the Milky Way and the Andromeda nebula follow the same pattern of formation, he predicts smaller galaxies make stars without stopping.

“Future observations of nearby galaxies may revolutionize our view about galaxy formation,” stated Noguchi in a press release.

Noguchi revealed his findings in a paper published the July 26th issue of Nature – the International Journal of Science.

Could human beings one day regenerate limbs? It’s a distant possibility. But Adameyko Labs in Boston, Massachusetts is a good place to start thinking about it.