On April 30th, one of the world’s most complex and expensive scientific instruments, the Swiss-based $4.75 billion particle smasher Large Hadron Collider (LHC), was shut down by a weasel that chewed through the wiring.

The weasel (or more likely a beech marten, a member of the weasel family) caused a short circuit by damaging a 66-kilovolt transformer. As far as we know, the little guy did not survive this encounter. It’s actually not the first time an animal briefly defeated the collider, since in 2009 a bird dropped a baguette on an external electrical power supply and the ensuing chain reaction shut down a part of the collider’s cooling system. 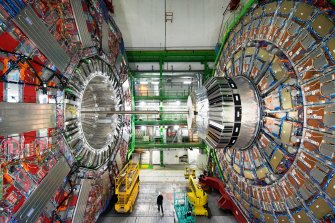 A view of the Compact Muon Solenoid (CMS) cavern.  The CMS is one of two large general-purpose particle detectors at the LHC.  It’s built around a huge solenoid magnet.

The collider works by by crashing proton beams at velocities approaching the speed of light. The largest single machine in the world, the LHC is located inside a 17-mile (27km) tunnel along the French-Swiss border and was most famously used to prove the existence of the Higgs Boson (aka “God Particle”), which is believed to give other particles mass.

The LHC was gearing up for a new experiment and will have to be checked over once again, following months of stoppage for other technical issues. When it will come back on, scientists will be using the collider to explore the signs of a new particle they picked up in December. This can be another potential game changer in the world of physics, with some proclaiming that a rewrite of the fundamental parts of the Standard model of physics can follow. 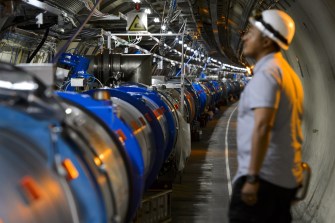 A scientist looks up at a section of the Large Hadron Collider.

Dave Charlton, an experimental physicist at the University of Birmingham in Britain, cautioned that the December results could just be a “fluctuation” and “in that case, really for science, there’s not really any consequence … But if it stays around, it’s almost a new ball game”.  He added that “this particle — if it’s real — it would be something totally unexpected that tells us we’re missing something interesting”.

Such possibilities are nothing new for the collider. The sheer scope and complexity of the collider have given rise to much awe and even fear of its capabilities. One persistent speculation is that it may create a black hole, which will, in turn, suck in our dear Earth. The LHC’s own press release refutes such possibilities but also seems to leave the possibility somewhat open by stating that even if they did create some black hole particles (through proton collisions), “theories predict that these particles would disintegrate immediately. Black holes, therefore, would have no time to start accreting matter and to cause macroscopic effects.”  So theoretically they would start rapidly decaying, and we should not fear. Let’s hope they are right. 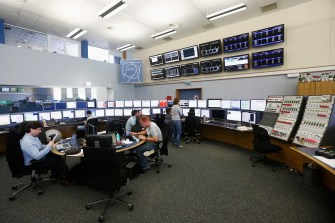 Inside the CERN control center.

If you’re looking to go over some of the data mined by the collider yourself, there’s been a recent release of 300TB of data from the Compact Muon Solenoid (CMS) particle detector.  You can access it here.

Inside the Main Room, containing the computing grid. The Worldwide LHC Computing Grid combines the power of more than 140 computer centres in 33 countries that can process more than 15 million Gigabytes of data every year produced from the hundreds of millions of subatomic collisions expected inside the Large Hadron Collider (LHC) every second.

Built in collaboration with over 10,000 scientists and engineers from over a 100 countries, the LHC is jointly funded by the countries of the European Organization for Nuclear Research (CERN), with additional money for experiments coming from private research organizations. It costs about $1 billion per year to operate the LHC. 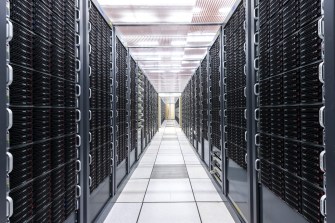 Another look at the LHC computing grid.

What do we know about the beech marten?  The little fellow is fairly common in Europe. It’s usually about 1.5 feet (50 cm) long. It likes to eat small mammals, eggs, worms and, apparently, Large Hadron Colliders.

Watch Michio Kaku talk about how he tried to build a supercollider in his garage.

And if you can’t get enough of collider fever, here’s Harvard physicist Lisa Randall explaining how the LHC works.

3 stunning ways Earth and spacetime could be destroyed

What Don’t We Get About Matter and Antimatter? We Shouldn’t Be Here.

Scientists work out methods for finding the difference between the magnetic moments of protons and antiprotons and see that they’re the same.
Hard Science

There are many scientific explanations for ghost sightings. This is the first ever to involve CERN.
Hard Science

CERN researchers make a major step in understanding antimatter by trapping antihydrogen atoms and controlling them with lasers.
Up Next
Surprising Science

There’s been a lot of talk among Republican candidates Ted Cruz and Donald Trump about completing the United States-Mexico border fence. But completing the wall has consequences outside of human politics.