Normal crystals—think salt or quartz—have atoms arranged in a fixed grid structure, and they don’t move around much. Not, however, time crystals.

Their atoms actually oscillate. They spin one direction and then when they’re exposed to an electromagnetic pulse they switch direction and spin the other way.

That doesn’t change when that same electromagnetic pulse is irregular; time crystals are locked to a particular frequency, one that maintains its regularity.

Also known as Discrete Time Crystals or DTCs, the one just discovered at Yale (and funded by the National Science Foundation) is made from monoammonium phosphate (MAP) crystals. They’re also the crystals that kids know and love when they get them in toy kits to grow their own crystals at home. 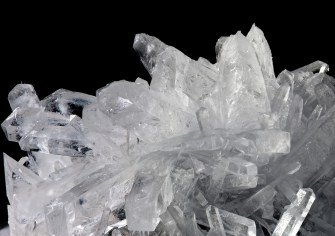 “We decided to try searching for the DTC signature ourselves,” said physicist Sean Barrett, senior author on two new papers about this discovery.

“Our crystal measurements looked quite striking right off the bat. Our work suggests that the signature of a DTC could be found, in principle, by looking in a children’s crystal growing kit.”

“We realized that just finding the DTC signature didn’t necessarily prove that the system had a quantum memory of how it came to be,” said Yale graduate student Robert Blum, co-author on the studies.

“This spurred us to try a time crystal ‘echo,’ which revealed the hidden coherence, or quantum order, within the system,” added lead study author Jared Rovny, also a Yale graduate student.

“It’s too early to tell what the resolution will be for the current theory of discrete time crystals, but people will be working on this question for at least the next few years,” Barrett said.

The two full papers are available here and here.

From politics to culture, we blame “tribalism” for humanity’s problems. This explanation is entirely wrong.
Up Next
Career Development

Top 8 Interpersonal Skills for the Workplace

There are certain skill sets that are crucial for professionals to be able to exercise in their work environment. Regardless of your industry, interpersonal skills (such as being able to […]