There are people out there who (still) believe climate change is a big hoax. Others think vaccines are dangerous and some even believe the moon-landing was staged. But what’s the probability that these conspiracies would go on without someone stepping forward, revealing the truth? David Robert Grimes has done the math.

Grimes has published this mathematical model in PLOS ONE, applying it to some of the most controversial conspiracy theories.

It’s a basic formula. Grimes looks at the amount of people involved and how long this “conspiracy” has gone on for.

“Even if there was a concerted effort, the sheer number of people required for the sheer scale of hypothetical scientific deceptions would inextricably undermine these nascent conspiracies,” Grimes writes.

When the amount of people involved in a conspiracy increases, the rate at which the conspiracy will be revealed increases (whether by some sort of whistleblower or by an accidental slip of the tongue). “For a conspiracy of even only a few thousand actors, intrinsic failure would arise within decades,” he writes. “For hundreds of thousands, such failure would be assured within less than half a decade.”

The following charts show how quickly a NASA moon-landing, climate change, vaccination, or cancer cure hoax would be revealed: 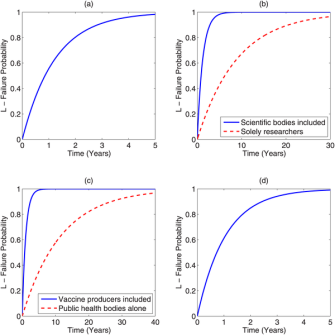 It’s a matter of odds, one that Edward Snowden proved when he confirmed to many citizens that their own government was spying on them. Big secrets don’t stay secret for long.

Grimes puts forth a compelling argument for why climate deniers, anti-vaxxers, moon-landing skeptics, and cancer cure believers should reconsider their stance. But he’s read the science, and understands his study will sway few minds to the side of reason.

“The grim reality is that there appears to be a cohort so ideologically invested in a belief that for whom no reasoning will shift, their convictions impervious to the intrusions of reality. In these cases, it is highly unlikely that a simple mathematical demonstration of the untenability of their belief will change their viewpoint. However, for the less invested, such an intervention might indeed prove useful.”

There’s a lot of emotion involved in conspiracy theories. The parents involved in the anti-vaccine movement come to mind. These myths hold meaning to people and reveal a deeper truth in how we perceive the world. In the age of the internet, the facts are always available to us. But as anyone knowns, if someone searches long and deep enough, they’ll eventually find their version of the truth and a forum of people willing to support it. Even those who spread the belief that the Earth is flat.

Natalie has been writing professionally for about 6 years. After graduating from Ithaca College with a degree in Feature Writing, she snagged a job at PCMag.com where she had the opportunity to review all the latest consumer gadgets. Since then she has become a writer for hire, freelancing for various websites. In her spare time, you may find her riding her motorcycle, reading YA novels, hiking, or playing video games. Follow her on Twitter: @nat_schumaker

Will Technology Progress or Bring down Humanity?

The Bulletin of the Atomic Scientists worries technological advancements are going unchecked. The group asks that regulatory bodies be established to help assess and prevent risks.