The U.K. tabloid Daily Starpublished an “exclusive” report over the weekend that stated, “Aldrin has always maintained he spotted a UFO on the way to the moon.” It quoted some words attributed to Aldrin that stated: “There was something out there that was close enough to be observed, sort of L-shaped.”

Only those words are not sourced anywhere. 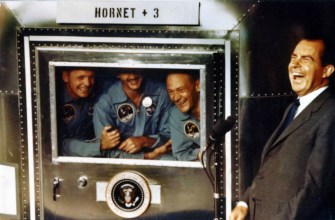 What he definitely has said about what he actually saw is recorded in a Reddit Ask Me Anything from 2014:

“On Apollo 11 in route to the Moon, I observed a light out the window that appeared to be moving alongside us. There were many explanations of what that could be, other than another spacecraft from another country or another world – it was either the rocket we had separated from, or the 4 panels that moved away when we extracted the lander from the rocket and we were nose to nose with the two spacecraft. So in the close vicinity, moving away, were 4 panels. And i feel absolutely convinced that we were looking at the sun reflected off of one of these panels. Which one? I don’t know. So technically, the definition could be ‘unidentified.’

We well understood exactly what that was. And when we returned, we debriefed and explained exactly what we had observed. And I felt that this had been distributed to the outside world, the outside audience, and apparently it wasn’t, and so many years later, I had the time in an interview to disclose these observations, on another country’s television network. And the UFO people in the United States were very very angry with me, that i had not given them the information.

It was not an alien. Extraordinary observations require extraordinary evidence. That’s what Carl Sagan said.

There may be aliens in our Milky Way galaxy, and there are billions of other galaxies. The probability is almost CERTAIN that there is life somewhere in space. It was not that remarkable, that special, that unusual, that life here on earth evolved gradually, slowly, to where we are today.

But the distances involved in where some evidence of life may be, they may be hundreds of light years away.”

The heart of the Daily Star assertion is that a voice recording by Aldrin describing the experience of seeing the odd light was processed by a company called Institute of BioAcoustic Biology using “new, top-secret technology” to study his vocal patterns.

If your skeptical flag is not raised by now, it should be.

In fact, Buzz Aldrin’s representatives replied to a request from Pedestrian about the BioAcoustic Biology report with these words:

“This is bogus and we don’t know where it came from.”

There you have it.

Those recent tax breaks for the extremely wealthy might just have a new place to be spent.