Amazon announced on Thursday it had signed a deal to acquire PillPack, an online pharmacy that organizes prescription medication by the dose and delivers it to customers.

The online retailer will reportedly pay about $1 billion to acquire PillPack, whose business revolves around people who take daily prescription medication in the 49 states to which it ships.

“PillPack’s visionary team has a combination of deep pharmacy experience and a focus on technology,” Jeff Wilke, Amazon CEO Worldwide Consumer, said in a statement. “PillPack is meaningfully improving its customers’ lives, and we want to help them continue making it easy for people to save time, simplify their lives, and feel healthier. We’re excited to see what we can do together on behalf of customers over time.” 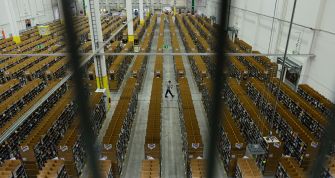 Shares of drug wholesalers, like those of AmerisourceBergen, McKesson and Express Scripts, also took a smaller hit following news of the deal.

Amazon has been steadily creeping into the healthcare industry in recent years.

In 2017, the company gained approval from more than a dozen states to become a wholesale pharmaceutical distributor. In January, Amazon, Berkshire Hathaway and JPMorgan Chase announced plans to create an independent company that’s “free from profit-making incentive” and geared toward providing innovative healthcare solutions to their U.S. employees.

The pharmaceutical industry is a giant market. Every year, Americans order 4 billion prescriptions and spend more than $360 billion on medication. Those numbers are only expected to rise, in part because the country’s elderly population is expected to double by 2050.

But today’s deal comes with few details and no promise that Amazon will be able to scale up PillPack’s business, which earned about $100 million in 2017.

CVS Health noted that PillPack isn’t the only company in the space with drug delivery capabilities.

“We already have the capabilities that PillPack is offering and we have scale in the business,” a company representative told CNBC. “Keep in mind, that we have not seen a large shift of patients that are looking for their medications to be delivered versus coming to a retail pharmacy. And for those patients that do desire to transition, we offer the option to ship their prescriptions to their home from our pharmacies or obtain the prescriptions through our Caremark mail facilities.”

The science fiction dream of a traversable wormhole is no closer to reality, despite a quantum computer’s suggestive simulation.
Up Next
Politics & Current Affairs

Utopia is a dangerous ideal: we should aim for ‘protopia’

Utopias are idealised visions of a perfect society. Utopianisms are those ideas put into practice. This is where the trouble begins.