Great Britain has just gone 48+ hours without any coal generation.

How was it able to accomplish this? I knew you’d ask.

The U.K. was a very early adopter of renewable energy sources and it has more offshore wind turbines installed than anybody else. Here’s the breakdown of what it used for energy during that period: 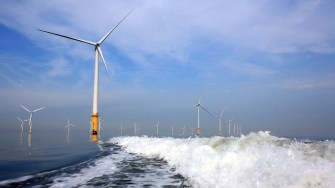 Turbines of the new Burbo Bank offshore wind farm in the mouth of the River Mersey on May 12,

National Grid director of U.K. system operations Fintan Slye made the announcement: “We have set a new record by operating the electricity system without coal for just under 55 hours. The U.K. benefits from highly diverse and flexible sources of electricity and our energy mix continues to change. National Grid adapts the system operation to embrace these changes.”

We could do that right here in the good ol’ US of A if we put our minds to it. Oh, and a little bit of financial backing.

It’s only the latest record for the country: 40.5 coal-free hours were logged during the last few days of October 2017. It’s only going to get better from here; the country’s coal-fired plants are due to be phased out in 2025.

Forget the Flowers: Give Valuable Training for Administrative Professionals Day

On April 25, leaders at businesses of all sizes will celebrate Administrative Professionals Day. The holiday honors the special individuals who work hard each day to make sure that offices […]