Speaking to an audience in Los Angeles on Thursday, Elon Musk revealed some new details about the tunnel-transport system his Boring Company is planning to build under the city.

Most notably, Musk and Boring Company director Steve Davis said rides on their “loop” system would cost $1, Uber’s flying cars idea won’t get off the ground, and that the company’s boring process would be environmentally safe and go mostly unnoticed by locals.

In case you haven’t heard of Musk’s grand scheme to fix L.A.’s “soul-destroying traffic,” as he’s branded it, the Boring Company hopes to bore a vast network of tunnels under the city that will transport both cars and “pods” containing up to 16 people at 150 mph. Unlike traditional subway systems, the pods would travel on electric skates that would connect to a main artery, and there would be side tunnels for entry and exit, meaning you could travel nonstop to your destination.

“It’s the only way we can think of to address the chronic traffic issues in major cities,” Musk said at the event, adding that Los Angeles’ I-405 has “varied between the seventh and eighth levels of hell,” and that if you could successfully build a tunnel system in Los Angeles, you could build one anywhere.

Musk founded the Boring Company in 2016, and since the company has built a test tunnel near SpaceX’s offices in Hawthorne, California, and last month city officials fast-tracked plans for a 2.7-mile proof-of-concept tunnel to be bored under West Los Angeles, in what amounted to an exemption from standard environmental impact analysis procedures. 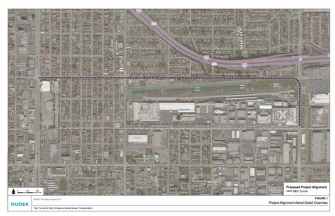 Under current plans, pedestrians on the street would enter pods that take up the size of a single or double-sized parking space. They’d then descend into a tunnel that would be 12 feet in diameter, run 30 feet to 70 feet underground, and would be able to withstand earthquakes, according to Musk. In theory, it’d take you from Dodger Stadium to LAX in 10 minutes.

Better video coming soon, but it would look a bit like this: pic.twitter.com/C0iJPi8b4U

The final “loop” network could end up looking something like this.

Musk also spent a decent chunk of time talking about the bricks the Boring Company plans to make out of all the dirt that gets excavated while digging. He said the company would sell them for “like 10 cents a brick or something like that,” and that “they’re really great bricks. You can, like, build houses with them and things.”

Not all Angelenos are thrilled about the developments. Some residents are worried about the disruption the boring process would entail, despite the company’s claim that digging would be mostly imperceptible because it’s conducted so far underground. Still, all that dirt would need to be removed, which would inevitably require many daily truck trips in and out construction areas.

Others say the city’s decision to fast-track the Boring Company plans gives an unfair advantage to the private sector, possibly harming the Metropolitan Transportation Authority’s plans to build a subway through the Sepulveda Pass, as the L.A. Times wrote.

But it looks like city officials intend to keep giving the Boring Company green lights. Shortly before Thursday’s event, Musk retweeted a post from @metrolosangeles that read “We’ll be partners moving forward.”

Despite a low unemployment rate, all is not well in the United States. Not by a long shot.