In a post from Ars Technica that has clearly rattled some chains over at Facebook central, it’s been revealed that Facebook can track phone call logs, text message dates and times, and contacts from Android phones.

Ahem. Let me restate that to make it absolutely clear: Facebook tracked your phone call dates and times, logs of when you messaged people, and actual contact numbers with names.

Here’s a sample, with Tweet, from user Dylan McKay:

Somehow it has my entire call history with my partner’s mum pic.twitter.com/CIRUguf4vD 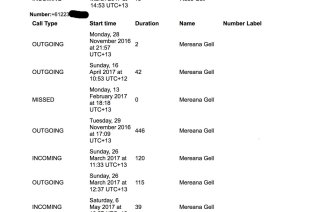 Why, exactly, this information is tracked is part of the company’s marketing witches brew, perhaps related to selling those bits of data to folks like Cambridge Analytica, which collected information on 50 million Facebook users before the last U.S. presidential election in an effort to help paying clients win.

Another reason Facebook keeps that data is because it uses that contact information to make friend recommendations on its site. If you’ve ever wondered why your ex’s friends, your hairdresser or your psychologist shows up as a friend suggestion, there you have it.

In response to an email inquiry by Ars Technica about this data gathering, a Facebook spokesperson stated, “The most important part of apps and services that help you make connections is to make it easy to find the people you want to connect with. So, the first time you sign in on your phone to a messaging or social app, it’s a widely used practice to begin by uploading your phone contacts.”

For its part, Facebook recently posted about this issue and contradicted the actual user experiences of many of the people who are actively engaged in trying to sort this out.

Meanwhile, Time has posted a guide to how to turn this “feature” off, if you’re so inclined.

Here’s a bit about the control social media exerts on us, by author and ethicist Tristan Harris:

A vertical map of Earth: How high or low can you go?

From La Rinconada in Peru to South Africa’s deepest mines: the quest for gold drives people to the greatest heights and depths on Earth.