New and exciting realities are now just a few screens away. The wildest dreams of fiction writers are slowly seeping their way into our current day and age. Many people are familiar with virtual reality. You put on some kind of headset and you’re whisked into an all-encompassing world of sound and sight. VR’s closest cousin, augmented reality, comes in a few different forms – overlaid blocks of text and information, sometimes cartoonish images and games that let you interact with the world around you. Both of these types of tech have earned their namesake, but what about when you combine the two of them?

The border between these digital worlds is already beginning to break down. Mixed reality is the intersection of both AR and VR. Right now the biggest player in the mixed reality space is Microsoft, which is leading the way with its Hololens headset. In order to learn more about MR, we need to look a little deeper at both augmented and virtual realities. 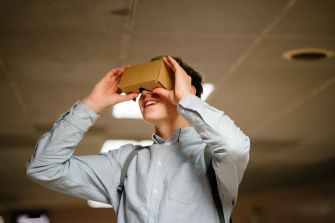 So much is happening in the world of digital realities that it can become puzzling to try and draw a distinction between VR, AR, and MR.  But each one of these realities can be quickly explained:

For VR, a computer generates the virtual environment that users then explore and interact with. Special hand controllers help to enhance and integrate the body into the entire virtual experience. An ideal virtual world will be completely cut off from the outside visual view, along with noise canceling headphones.

In an augmented reality, users interact with the real world while virtual content is added to the screen. Think of the quickly viral videogame Pokemon Go or some Snapchat features that add digital avatars to the world around you. Most of current AR is experienced through smartphones. There has been a mixed reaction to AR glasses, and no clear leader in that space yet – especially after Google’s failed Google Glass experiment.

You can also access virtual worlds through 360-degree video, which is also considered another form of VR. If, for example, you wear a Google Cardboard, you’ll be able to view any type of 360 video with your headset.

You must wear a specialized VR headset to experience any kind of virtual reality. Most headsets are connected to a computer or gaming console. Oculus Rift, HTC Vive and PlayStation VR are some of the more advanced and most popular devices in the space. Other affordable options include the Google Cardboard – these types of standalone VR headsets work in tandem with a headset. 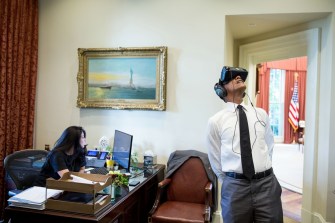 Mixed reality on the scene

The most recent development in reality technologies has given us a few forms of mixed reality. One type of MR is the ability to not only overlay objects on the real world, but interact with them as well. This is a kind of advanced type of AR. Another interesting form of MR takes its cue from a completely immersed virtual environment where the real world is blocked out. At first, it sounds like just plain virtual reality. But in this instance, the virtual environment that you see is tethered to and overlaps the real world environment. Here’s an example of how this works.

Mixed reality fuses layered objects into the real world with an immersive digital world, allowing you to do things not possible in a strictly AR or VR digital environment. The cutting-edge paradigm shift into MR has been made possible with the Microsoft Hololens – a headset that as the name would suggest, allows its users to overlay holograms from virtual worlds on top of regular old reality (take a look here — they look like space-age Oakley sunglasses). Essentially, it creates the feeling of being present within a virtual environment.

This type of intersection between the real and virtual gives us an entirely new space that we can interact and innovate inside of. We’ll be unearthing a whole new expanse of possibilities as the technology grows. 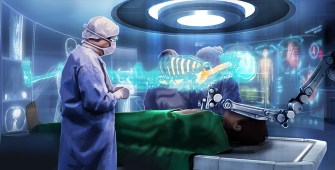 If we’re to take a page from Marshall McLuhan, mid 20th-century media theorist, our new mediums of technology will begin to radically alter our perceptions of ourselves and reality regardless of the content. A famous McLuhan quote puts it simply:

“We become what we behold. We shape our tools and then our tools shape us.”

Virtual and mixed realities will be no different and will completely change our way of doing things and viewing our world. Look no further than actually trying to explain and differentiate between these realities. It will become more difficult throughout the years as these once novel technologies will be completely integrated into our lives. No one thinks much about having a supercomputer in their pocket anymore. It’s become a normal mode of existence. AR, VR and the junction point of mixed reality is the next logical step.

Reality is almost becoming gamified. One day, surgeons should be able to overlay x-ray or ultrasound images over a patient while they operate on them. Designers and artists will be able to collaborate with another from miles away and project an imagined idea into a real-life space. Drones traversing the sky will instantly relay quantifiable information about the world while they fly. There’s no end in sight to what’s possible.

Different perspectives and another person’s point of view will seamlessly become a visual activity to participate in. There is no limit to the medium. 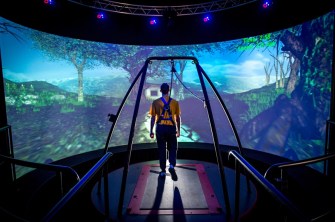 A future of possibility

Inventors and artists are the ones who tend to lead the way when it comes to future technology. Our ability to transform the world and our lives is limited only to our imagination. With mixed reality, we’re given a blank canvas over the rich and vast natural environment. It’s almost as if the internet has found a new conduit, or rather a physical manifestation of itself, and divorced itself from the computer screen. This very well could be the beginning of a seismic shift of our shared technological realities.

Think Facebook can manipulate you? Look out for virtual reality

As Facebook users around the world are coming to understand, some of their favorite technologies can be used against them. It’s not just the scandal over psychological profiling firm Cambridge […]