In the popular imagination, robots are metallic, often humanoid contraptions, stuffed with wires, circuit boards, batteries, and a latent desire to destroy us. But a research team from Harvard has introduced a robot that breaks all such stereotypes. Meet “Octobot”, the soft and cute, fully autonomous robot that looks like a small octopus.

The 2.5 inch Octobot has no rigid structures in its body, made of silicone rubber. The robot is flexible, and is not tethered to anything. And it demonstrates the potential of the new field of “soft robotics”.

Professor Robert Wood, one of the research leaders, who teaches at Harvard’s Wyss Institute for Biologically Inspired Engineering, described the team’s accomplishments this way:

“One longstanding vision for the field of soft robotics has been to create robots that are entirely soft, but the struggle has always been in replacing rigid components like batteries and electronic controls with analogous soft systems and then putting it all together. This research demonstrates that we can easily manufacture the key components of a simple, entirely soft robot, which lays the foundation for more complex designs.”

What are the applications of soft robots?

Potentially, soft robots can be useful in performing delicate tasks where a hard-bodied machine would fail or tasks where a metallic or plastic robot would present a danger to humans.

Michael Wehner, a post-doctoral fellow involved in the research, explained: 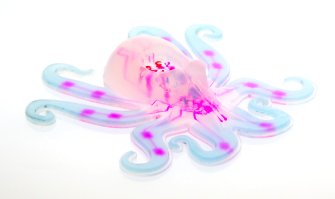 How was the Octobot created?

Professor Jennifer A. Lewis, the co-leader of the research, elaborates:

“Through our hybrid assembly approach, we were able to 3-D print each of the functional components required within the soft robot body, including the fuel storage, power, and actuation, in a rapid manner. The octobot is a simple embodiment designed to demonstrate our integrated design and additive fabrication strategy for embedding autonomous functionality.”

The Octobot is pneumatic-based and powered by gas.

A chemical reaction inside the robot turns a small amount of liquid fuel (hydrogen peroxide) into a large volume of gas that flows into the octobot’s eight arms and inflates them. A “fluidic logic circuit” uses valves to regulate this operation.

Michael Wehner says this is the reason for their approach:

“Fuel sources for soft robots have always relied on some type of rigid components. The wonderful thing about hydrogen peroxide is that a simple reaction between the chemical and a catalyst — in this case platinum — allows us to replace rigid power sources.”

While the field of soft robotics is still emerging, other bio-inspired robot designs are on the way. Research teams are working on flying robot bees, crawling robots, and even cockroach-like robots.

You can read the research paper on the “Octobot” here, in Nature magazine.

These Soft Robots Have Super Strength, Cost Less Than a Dollar, and Are Built in Minutes

This remarkable breakthrough is sure to usher in a new generation of robots.
The Present

8 Harvard University courses you can take right now, for free

The key to a happy relationship? Understanding why you fight

Why do people have the same fights, over and over again? That’s the repetition compulsion, a deeply ingrained psychological phenomenon—but not so deep that it can’t be beaten.
▸
6 min
—
with
Dan Shapiro
Videos

How to win a negotiation? Decode the subtext of people’s demands

One of the fathers of string theory proposes a new equation that may reconcile general relativity and quantum mechanics.