British Prime Minister Theresa May has promised millions of pounds to help produce AI systems that will help diagnose cancer earlier, which in turn will save thousands of lives. The goal is for a series of algorithms to be created which will scour medical data to find symptom and lifestyle information that can be used to advise a general practitioner on when a specialist should be called in.

Right now, a patient with the early symptoms of cancer would have to hope that their doctor guesses that they have a deadly condition and not something more common. Pancreatic cancer, an example with a high fatality rate, only causes symptoms in the late stages and begins by causing back pain and appetite loss. Hardly conditions that seem too extraordinary, but in this case ones which signal a terrifying condition.

With this technology, a patient with those symptoms and associated risk factors would be quickly identified and recommended for further tests.

Will it be put to good use? Can the NHS save people with it?

Given the massive amounts of information that the United Kingdom’s National Health Service has access to, the algorithms would have plenty of data to work with and advances in cancer detection are bound to follow. Similarly, the technology required to make the program work would be rather advanced and will drive AI innovations for years to come.

It should be repeated that the goal of this technology is not to help find a cure but to help diagnose sooner by identifying the people who show early symptoms and have risk factors. As of right now, early detection is one of the best tools for beating cancer. So, this tech will save thousands of lives a year in England alone if it proves successful. 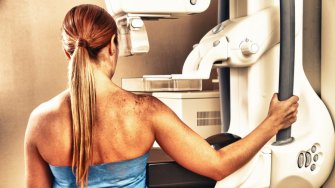 A woman gets a mammogram test. Studies have shown that early detection has prevented millions of cancer deaths.

What about the price tag?

The millions that this would cost are but a drop in the bucket compared to the increased costs of running the NHS over the next 15 years. However, the questions about the spending must be asked.

Is this a good investment?

This is a big question for cancer research. Since 1971, more than half a trillion dollars have been spent on cancer research with precious little to show for it when you look at the death rate. To make matters worse, if cancer were cured tomorrow the resultant increase in life expectancy would be a paltry 3.3 years.

Meanwhile, problems like world hunger continue. These problems are just as serious as cancer but have solutions at hand. The cost of which would be less than what we have spent on cancer research. The problem of world hunger also has the bonus that a solution would not require years of scientific research to discover, test, and then distribute to the ill. Hypothetically, we could rapidly end world hunger by better funding the same systems we use to improve the situation now. 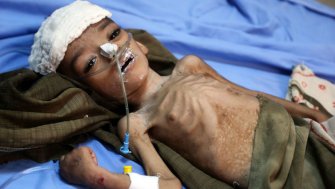 A malnourished Yemeni child, should the money spent failing to cure cancer go to feeding them instead? (ABDO HYDER/AFP/Getty Images)

The statistics also speak volumes, 8.2 million people die each year of cancer worldwide, while many more will die of hunger or suffer the long-term effects of malnutrition.

Of course, these factors are irrelevant to the 22,000 people a year who could be saved by the cancer detecting AI. The fact that any of us could get cancer is a major element in our decisions to fund research into cures that might end up going nowhere, the chance that we might need that cure later makes the investment look sounder.

The new system that the NHS plans to bring into existence will save thousands of lives, help advance AI technology, and help us understand a terrible disease a little bit better. Improved medical care is a noble goal, but how many lives could have been saved if the money had gone elsewhere? Such grim questions of utilitarian calculus must be asked as we decide where to direct our limited resources.

Elon Musk had a bit of a meltdown on Twitter this week as the media reported troubles at Tesla, including missing production goals and clashing with the government about the infamous […]