Not so long ago, fake news was fairly simple to define: The Onion, the Borowitz Report, and most of what is displayed at the checkout counter of grocery stores. Now, in an era when the White House can talk about “alternative facts,” fake news itself is a more complicated term.

There is a wide definition of fake news, and a narrow one. In the broad sense, it includes many types of misinformation, circulated as deceptive headlines, questionable theories, and articles, tweets, and other sources of information that cast doubt on consensus around an issue. In a more narrow sense, fake news is fabricated content that mimics the appearance and writing conventions of journalism, usually produced to generate revenue through advertising that depends on viewer clicks.

These two types of fake news have different origins. At the broader level, fake news emerges from what Naomi Oreskes and Erik Conway describe as the organized production of doubt. In their book on climate change deniers, Merchants of Doubt, these two historians of science show how campaigns against tobacco and CO2 emissions were foiled by high-ranking scientists and lobbyists who could undermine established scientific consensus about harm by suggesting that the jury was still out on these topics. The idea of Pizzagate – that the Clinton campaign was running a child sex ring out of a DC pizzeria — would fit with this extreme manufacture of doubt.

The narrow definition of fake news – fabricated content mimicking journalism – is born of social media’s ecology, or what some scholars call the attention economy. Trolling, where fake stories are circulated just for the ‘lulz’, has become a much wider, and monetized, practice. Clicks on ads and websites generate advertising revenue, which in turn drives profits. Online renown is measured in the number of views an idea garners across social media platforms, tracked by means of likes (or dislikes ) and re-posts.

Within this economy, attention-getting stories win. The long-term effect is that extreme, headline-grabbing stories circulate often and frequently. While certain stories are manufactured entirely to get these clicks – well-publicized cases like the Macedonian teenagers earning a profit by duping Trump supporters with their fake news sites, are part of a much broader shift towards measuring value in terms of eyeballs on a page.

Is fake news causing polarization among people and between people and the government? Or is it only a symptom of this deeper, underlying problem?

Fake news is fostered by clicks—whether by believers or by doubters. Within this new media ecology, fake news is a symptom of popular distrust of the government and of institutions, including the press. At the same time, fake news creates a sense of politics as a choice between extremes, by inciting extreme emotions—whether anger or love or despair or humor—as a means of garnering attention and developing a climate of distrust. Perhaps the greatest danger is the sense of inevitability it creates, which could lead people to opt out of the political process itself. 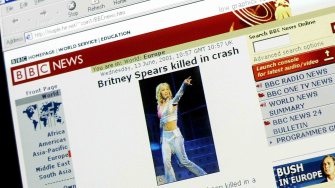 A website, falsely identifying itself as ‘BBC News’ with links connecting it to the real ‘BBC News,’ reports the death of pop singer Britney Spears June 13, 2001 in London, England. (Photo by Sion Touhig/Getty Images)

Given that fake news might be both a symptom and a contributor to increasing polarization in the United States, what can be done about it? Social media companies have to take responsibility. They wanted to take credit for the Arab Spring, and they must hold themselves accountable when the story is negative like it is with fake news. ­If social media sites are seen as untrustworthy, traffic may begin to be directed away from these sites and towards news media brands considered reputable.

Of course, like any kind of information, fake news cannot simply be stopped by decree. Given the networked nature of information, banning certain news items from prominent media sites will ensure they appear elsewhere, and each new ban will produce the same effect. And it is too easy to blame fake news on the ‘ignorant’ individual who supposedly believes in it.

But if we reconceptualize fake news as creating a repetition effect across media that empowers already-held beliefs, then we will find an approach to fake news in the mechanisms of the attention economy itself. If there is a point of pressure on this economy, it will come from upending—or teaching us all to upend—the “clickbait logic” that runs social media platforms. Evidence suggests that when confronted with data proving a news item is false—such as correcting misleading crime statistics—people will sometimes adjust their opinion.

There may be very little market incentive for companies to do this. If people come to sites like Facebook to be part of their community and to feel good, then they may leave if what they see does not agree with what they already think. On the other hand, if such spaces thrive on the idea of the unimpeded flow of information, then they may need to self-regulate, before governments begin regulating for them. In Germany, for instance, the country’s strict libel laws may allow the government to fine Facebook for hate speech and misinformation.

As this story unfolds, we must closely observe what is being done about fake news and what the unintended effects of these policies might be.

First, are companies suggesting technical solutions to the problem? In other words, will algorithms try to pre-sort the news and hide those items that are deemed fake from the news feed? If so, have we moved towards automating our faculty of judgment? In what ways are such technical solutions inadequate?

Second, does the scandal over fake news give rise to a ‘new age’ of journalism? In other words, are we going to retrain and reemploy journalists, who have largely lost their jobs and have become deprofessionalized in the age of social media? The Journalism Project that Facebook just announced might lead in this direction. Will news services be paid for fact checking? Did we just create a new middle class job by accident?

We need greater innovation in dealing with the fallout of the attention economy, but technology companies cannot be expected to come up with solutions on their own. At the University of Washington, we are focused on inclusive innovation because we believe we must bring a diverse set of people with a variety of perspectives and backgrounds  to the table to solve broad society problems,  — that’s the solution needed here.

We have an opportunity to create content models that reward credible facts and stories. This is clearly what the mainstream press is struggling to do, but it is not sufficient for the long-term health of our democracy. Technology companies must pull together people from media and the social sciences in a more inclusive approach if they are serious about stamping out fake news.

Albert Einstein played a mean violin.
Up Next
Strange Maps

A Map of Lexical Distances Between Europe’s Languages

A Finn and a Spaniard walk into a bar…