In the 1990s, astronomers discovered that the universe is expanding at an accelerating rate. Yet, the exact rate is unclear. We have two calculations that constantly keep coming up — but which is correct? Both, probably. One theory may hold the answer; it essentially describes the universe as a big block of Swiss cheese with the Milky Way lodged in one of its holes, and recent research has strengthened this theory. Now a new analysis shows that it can rectify the difference in measurements surrounding the Hubble Constant (the formula used to describe the rate at which the universe expands).

It basically works like this: galaxies closer to ours move more slowly away from us, while those at a farther distance move away more quickly. It may actually be that the distance between objects is increasing at a faster rate, rather than everything thrusting forward at once. The Hubble Constant can be expressed as 42 miles per second per 3 million light years. Could this Swiss cheese theory help explain the Fermi Paradox i.e. why we haven’t found any other intelligent life? We may just be living in a bad neighborhood, cosmologically speaking.

In a 2013 observational study, University of Wisconsin-Madison astronomer Amy Barger and her student at the time, Ryan Keenan, offered compelling evidence that the Milky Way and our immediate neighbors, are actually residents of a gigantic void. Our neighborhood contains fewer stars, planets, and galaxies, when compared to other areas in the universe. Astronomers and cosmologists have been asking why. Now, one of Barger’s students, Ben Hoscheit, has followed up. He’s supporting this Swiss cheese model with his own analysis, and the results are intriguing. 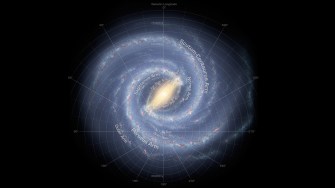 Map of the Milky Way.  NASA/JPL-Caltech/Federal University of Rio Grande do Sul.

The first technique used to calculate the rate of the universe’s expansion is to study a certain kind of radiation, known as the cosmic microwave background (CMB). This is the residue of the Big Bang. The other is to evaluate supernova explosions close to the Milky Way. The latter is considered a more reliable method. Yet, no matter how you measure it, the universe should be expanding at a constant rate.

These two efforts have consistently returned different values. “Fortunately, living in a void helps resolve this tension,” Hoscheit said recently, in a presentation at a meeting of the American Astronomical Society. In this model, the universe is made up of what are called filaments and voids.

Filaments are where all the stuff is; the portions between the holes. These contain galaxy clusters with lots of stars, planets, gases, and space dust. There may even be dark matter and dark energy, which is thought to make up 95% of the known universe, although they haven’t been proven to exist yet. Within voids, little cosmic “stuff” is found.

Ours is named the KBC void, which stands for Keenan, Barger, and Cowie. These are researchers at the University of Hawaii, who in 2012, first posed the hole-ridden universe theory. The KBC is seven times the size of a normal void. It’s the largest ever found.

Spherical in shape, the KBC has a radius of one billion light years. As you pan out, more galaxies and other matter appear, clustered around the edges. According to the analysis, outside of this big, space-filled hollow, gravity is slightly stronger. With this consideration, one can square our “local” value of the Hubble Constant with the “cosmic” one. 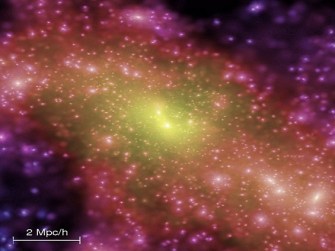 Galaxy distribution within a filament. The Max Planck Institute for Astrophysics.

My thought is, in areas outside of our void, where there’s a lot more cosmic stuff, there’ll be a higher chance of intelligent life forming, especially since the development of such life is such a precarious and complex process, where so many factors have to be just right. Chances are, some intelligent extraterrestrial race is located in a more densely packed area of the universe, replete with stars and exoplanets, who regard our giant void as just some empty backwater, the boondocks. If they’re hostile and advanced, this could even be a godsend. That’s just my little hypothesis. But it’s fun to ponder possibilities. What do you think?

How much CO2 does a single volcano emit?

Some say it’s more than all of humanity emits in a year. But people say a lot of things. What does the science say?“One volcano puts out more toxic gases — one volcano — than […]