If you ask “What is a GMO?” the answer you get may depend on who you ask.

The Non-GMO Project, an anti-GMO organization, would say, “Genetically modified organisms (GMOs) are living organisms whose genetic material has been artificially manipulated in a laboratory through genetic engineering. This creates combinations of plant, animal, bacteria, and virus genes that do not occur in nature or through traditional crossbreeding methods.”

This seems like an innocuous answer until you ask the same question of a pro-GMO group.

GMO Answers outs it this way: “Typically when people refer to GMOs they are speaking about Genetically Modified Organisms (GMOs), which are crops developed with genetic engineering, a more precise method of plant breeding.

(Emphases in both of the quotes above are ours.)

In the italicized difference lies the kernel of the controversy over the safety and value of GMOs. GMO Answers says crossbreeding has been going on for 10,000 years, and therefore GMOs are just the latest in a line of time-tested methods for optimizing plants and animals for eating — they consider GMO foods therefore to be safe, and to offer a range of benefits you can read about on their website. The Non-GMO Project, on the other hand, views GMOs foods as risky, new genetic experiments, asserting that “In the absence of credible independent long-term feeding studies, the safety of GMOs is unknown.” They have other concerns as well — see their website.

The point is that as a non-expert consumer, it’s hard to know what to think about GMOs. Of course, we’re already consuming them, with 10 crops in the U.S. having so far received the go-ahead for commercial production: alfalfa, apples, canola, corn, cotton, papaya, potatoes, soybeans, squash and sugar beets. Insurers netQuote recently surveyed 1,021 Americans to find out how we’re feeling about GMOs these days and the degree to which we even understand what they are.

All of the images in this article are by netQuote.

We know what GMOs are. Kinda.

It’s surprising and a bit alarming how unclear we can be about this most basic question. While 89.3% of respondents claimed to know that “GMO” stands for “Genetically Modified Organism,” it’s not at all clear they’ve given much thought to what that phrase actually means. 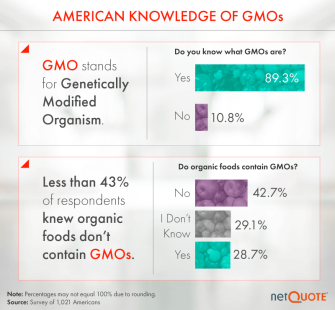 Maybe they just don’t know what the word “organic” means. According to the BBC:

“Organic food is the product of a farming system which avoids the use of man-made fertilisers, pesticides; growth regulators and livestock feed additives. Irradiation and the use of genetically modified organisms (GMOs) or products produced from or by GMOs are generally prohibited by organic legislation.”

But we know when they’re in our food, right?

Well, maybe. Though there’s a 2016 federal law requiring that foods containing GMOs be labeled, the Trump White House, which has declared its support for the use of GMOs, is preventing any meaningful labeling from happening. Unfortunately, a third of Americans incorrectly believe that they can expect GMO foods to declare themselves from store shelves.

Well, first of all, over 60% of the people reading the previous section are feeling unhappy right now, as revealed by the top section of the image below. 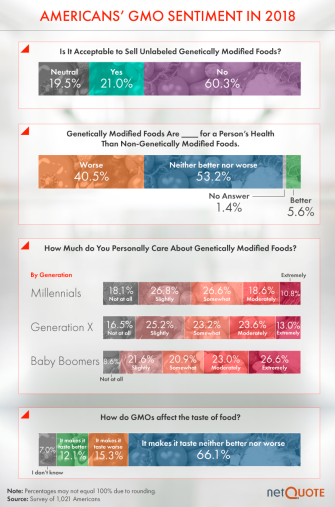 Still, more than half of us think that GMOs are either the same as non-GMO foods for our health, and 5.6% even think they’re better for us. (4 out of 10, however, don’t buy their healthfulness.)

As for how much we care, broken down by age groups, significantly more Baby Boomers care a lot about GMOs than any other age group. After all, they did grow up in a pre-GMO world.

As far as the taste of GMOs, it’s a big “ho-hum,” with most people expecting little difference in the flavor of the modified foodstuffs.

A common concern is the Big C

Gene editing is so new that no long-term, multigenerational studies are yet available, and when we think genetic mishaps, we tend to think of cancer. netQuote asked people if they believe GMOs cause cancer. 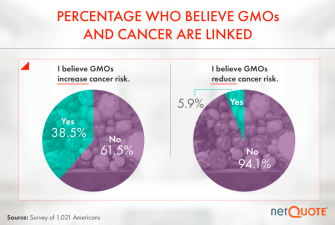 This is clearly an area of concern. While nearly two-thirds of respondents felt GMOs could cause cancer, basically no one believed it could help prevent it.

So how comfortable are we with GMO foods?

Well, it depends on the food. We’re slightly more uncomfortable than uncomfortable with GMO vegetables and fruits, but we really don’t want to know about GMOs in meat/fish and dairy. Hold that lab-grown burger, please.

Carbs, those deceptively benign-seeming comfort foods, have us less concerned about GMOs. Maybe once we cross the junk-food barrier, we figure we might as well lower our standards altogether.

Are we confident enough to feed kids this stuff?

Slightly more parents than not say “no” to the idea of serving GMO food in schools. For adults without kids, the proportions are roughly flipped. No surprise. 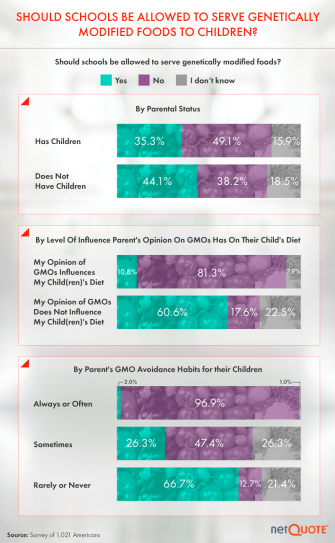 Another thing that’s not surprising is that parents aren’t too sure how much influence their opinion of GMOs has on their kids. And as far as affecting kids’ habits, yipes, the young ones don’t seem to care what Mom and Dad think much at all.

Who should be in charge of keeping us safe on GMOs? 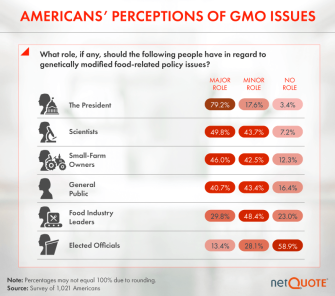 Not very surprisingly, we don’t trust our food-industry leaders to have our best interests at heart with GMOs. But beyond that, America’s desire for a national Daddy (or Mommy) is on full display here: We think the president is the person most responsible for managing GMO consumption. (As noted above, the current one thinks they’re just fine.) What makes this strange is that the group we least want to see involved in this is our elected officials, which — hello — includes the President, at least during unchallenged election cycles.

So what have we learned?

We’re confused about GMOs. Or not. 60 other countries currently insist on rigorous labeling of GMO foods, so the U.S. is an outlier. 300 regions have banned GMOs altogether.

We — baffled as we may be — nonetheless have daily choices to make regarding what we put into our own bodies. The best we can do is keep reading up on GMOs and try and sort out the science from the fiction.