Space X successfully launches TESS, the Transiting Exoplanet Survey Satellite a.k.a. “The Planet Hunter.” NASA will use it to search for planets that may support extraterrestrial life.

It will use the Earth’s gravity to “slingshot” to where it will end up, and it’s a joint NASA/SpaceX venture.

“The Moon and the satellite are in a sort of dance,” Joel Villasenor, instrument scientist for TESS at the Massachusetts Institute of Technology, said. “The Moon pulls the satellite on one side, and by the time TESS completes one orbit, the Moon is on the other side tugging in the opposite direction. The overall effect is the Moon’s pull is evened out, and it’s a very stable configuration over many years. Nobody’s done this before, and I suspect other programs will try to use this orbit later on.”

When the Kepler space telescope launched in 2009, its target was to find planets between the size of Earth and Neptune, from 500 and 1500 light year away.

But TESS is designed to find planets much closer.

SETI Institute astronomer Seth Shostak told Space.com, “Kepler is what made us become aware that planets are as common as telephone poles. But the stars that Kepler was staring at for four years … they were all somewhere between 500 and 1,500 light-years away.” 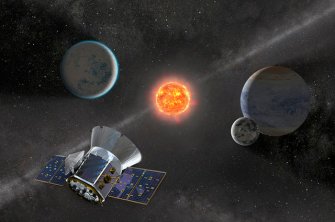 It’s not designed to find Earth-like planets, but instead, planets that are orbiting the “habitable zone” of nearby small stars. Further study can then be done by regular scientific telescopes.

Since the planets discovered by TESS will be much closer, they can be studied much more easily. Since different gases absorb different light wavelengths, planet atmospheres can be pretty quickly determined, once viable candidates are found.

Scientists will be specifically looking for signatures of life, such as water vapor, oxygen, methane, and more.

SpaceX recently secured about $507 million in new funding. Based on recent statements, SpaceX will put that cash toward three ambitious projects.