Aura airlines, launching next year, will offer good food (sushi, anyone?), no luggage fees, plenty of legroom, no overbooking of flights, free drinks, free WiFi, walk-up boarding 20 minutes before a flight rather than two-hour advance arrival, and more. It’s a brand-new concept from a company called Presidential Aviation. 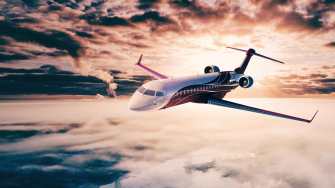 For those why fly frequently, such as business travelers and those commuting for their job who are tired of what air travel has become, it could be a welcome option.

For $100 a month subscription fee, passengers can become “Key Holders” and will fly on this airline at fares as low as $280 for First class and $600 for Wave class, which is an ultra-luxury tier. For those who don’t subscribe, the prices for both classes will be double. (Note that these prices are based on one-way travel.) 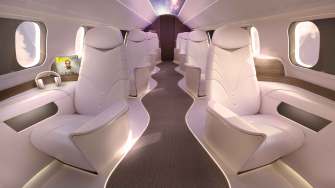 For either class, the experience is supposed to be like that of a small, private jet, the kind chartered for businesses and the wealthier set. For those who pay the $100 a month subscription, flights are largely less expensive than current first-class flights on commercial airlines (a quick spot check shows that advance purchase of a first-class, round trip ticket on major carriers with 45 days to spare is $600 to $800.). The planes are all redesigned CRJ800 Bombardier regional jets, which originally held 75 passengers. These now hold 29, so you can imagine the room increase. The company has not revealed just how many aircraft it will have in the fleet, but it plans to fly its main routes twice a day, and add special routes for vacation destinations and festivals during certain times of the year, such as Sundance and SXSW.

One addition that actually sounds pretty fascinating: VR headsets, where passengers can “see” in 360 degrees what’s happening outside the plane as if they were sitting on top of it.

The plan is for no overselling of seats, and a strict limit of 29 seats total—21 in what it calls First class, and eight in the higher-class Wave seats, which can even lie down fully as reclinable, “zero-gravity” seats. Passengers in these seats will also get to order meals prepared by a chef. 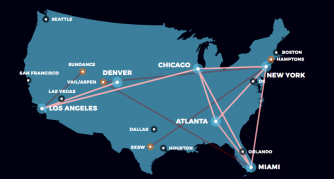 Initial cities serviced will be New York City, Chicago, Miami, Atlanta, Denver, and Los Angeles, which, not coincidentally, match quite well with the hubs for all the major airlines.

And with a flight attendant to passenger ratio of 1 to 10, it really will feel like the old days of flying.

Finally, the airline claims it will be carbon-neutral, with fares helping to offset the carbon footprint that the planes create.

Will it get off the ground?

Starbucks is going strawless in 2020

By 2020, recyclable lids that look like sippy-cups will be de rigueur.