Tiangong-1, the eight-ton Chinese prototype space station, is about to burn up as it reenters Earth’s atmosphere. Scientists have known this was going to happen for the last few years, but as it gets lower and lower, approaching the point where it starts to burn up and slow down much more dramatically, its path and the estimate of when it will encounter our planet’s surface will become more clear. Some experts are predicting this coming Friday, but it could be over Easter weekend. 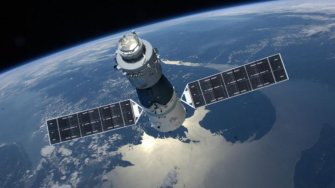 Tiangong-1 is a satellite laboratory that contains large amounts of hydrazine, a toxic, flammable chemical that can wreak havoc on the human body, including poisoning the blood, kidneys, lungs, the central nervous system, and damage to eyes, nose, mouth, and respiration. It can also produce severe burns on the skin. The concern is less that surviving pieces of the space station will smash into people and more that the hydrazine will be a problem; this is especially worrisome because, being the curious humans that we are, those who don’t know any better will probably go hunting for parts as souvenirs or collectibles.

Indeed, a warning from Aerospace Corporation’s Center for Orbital and Reentry Debris Studies (CORDS) states: “Potentially, there may be a highly toxic and corrosive substance called hydrazine on board the spacecraft that could survive reentry. For your safety, do not touch any debris you may find on the ground nor inhale vapors it may emit.”

While it’s still not clear how much of the craft, if any, will incinerate on the way to Earth’s surface, predictions are that some of the chunks will likely survive — and if they do, they will scatter over the span of a few hundred kilometers. Not to worry about impact, though; the chance of a person actually being hit by a piece of such a satellite are calculated at about one in 21 trillion.

It’s still a question of where; right now, the path is a huge possible area basically encompassing most continents, however that will get narrower as the trajectory becomes more clear.

Frequent updates will soon begin to be issued in news sources as Tiangong-1 is currently trending on Google News in the Science category, and that will likely not change until it’s over and done.

The Chinese space lab is an artificial entity in the cosmic shooting gallery, of course. There’s a lot more things heading our way that are probably more of a concern. Neil deGrasse Tyson explains:

In an increasingly global professional and social environment, organizations are becoming increasingly agile and adaptive to these changes. Regardless of industry, leaders share common concerns over changes in technology, an […]