For the first time, the United Kingdom has powered over 1,000 hours of energy in the various countries that compose it without the use of coal.

Gas-powered electricity, nuclear, wind and solar, and bioenergy have all generated more this year than coal.

The last eight coal plants in the United Kingdom ticked up in power generation when a massive storm hit in March, but it was brief and didn’t affect these numbers much at all. It’s a rather precipitous decline in the usage of the polluting power source; 40% of the U.K.’s electricity was supplied by coal in 2012, and this year, so far? Just 6%. 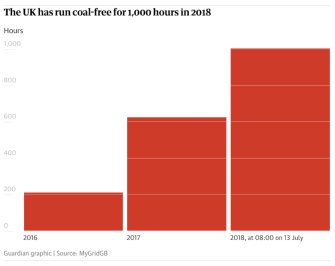 According to the U.K.’s official figures, just over 30% of electricity in the first three months of 2018 were generated by renewables; pretty impressive.

Of note in those numbers: offshore wind farms generated 53% more electricity this year, and new solar records have been set as well: 1.94 terawatt hours of power were generated between June 10 and July 9, beating the previous record of 1.77TWh. However, this news isn’t all good, partly because this is the fifth-sunniest summer on record.

“Some of this increase is due to more solar having been installed since 2017 but most of the increase is climatic, with summer 2018 being the fifth sunniest on record so far. These figures highlight the growing importance of solar energy as a low-carbon and low-cost source of electricity,” Alastair Buckley, a solar expert at the University of Sheffield, told The Guardian.

The plan is for coal to be phased out entirely by 2025, but at this rate, it could be sooner.

A spokesperson at the U.K.’s Department for Business, Energy, and Industrial Strategy, sounded quite proud. “The U.K. leads the world in tackling climate change and this shows the time of unabated coal-fired electricity is being ended by a cleaner, greener future increasingly powered by renewable energy.”

And here’s the Dudgeon Offshore Wind Farm in England’s North Sea, near Norfolk.

A medical entomologist points to metabolism, body odor, and mindset.
Up Next
Technology & Innovation

How blockchain can create a more humane process for refugees

Blockchain technology could help alleviate the struggles of asylum seekers who are many times left in the wake of political fights.