What would you think if you were looking into the night sky and saw a purple column of light streak vertically in front of you? At first glance, it appears to be a phenomenon much like the Aurora Borealis or “Northern Lights,” according to Eric Donovan. He’s an associate professor of physics and astronomy at the University of Calgary. Prof. Donovan says it has the same arc shape as an aurora but the color is different. Auroras also usually go horizontally, while “Steve” as it’s been named, is vertical.

Canadians citizens discovered the phenomenon, which was recently verified by the European Space Agency (ESA). Prof. Donovan first came across it while viewing pictures on the Alberta Aurora Chasers’ Facebook page. “We have seen it from Hudson Bay all the way over to Alaska in our data, and so it’s like someone reached in from space and drew a line with a purple magic marker across the Earth,” Donovan said.

He and the ESA took the photos and information from the group’s page and cross-referenced it with data from ESA Swarm satellites. These monitor Earth’s magnetic field. Data from special cameras which watch the night sky was also used. Donovan and colleagues discovered that the phenomenon is 18 miles (25 km) wide, can last up to an hour, runs East to West, and isn’t often visible October to February. 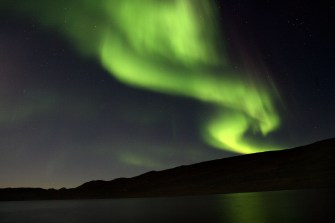 Originally it was thought to be a “proton arc.” These are the purple streaks that sometimes pop up alongside auroras. Scientists studying them say they have nothing to do with protons at all. Protons themselves do make auroras when they encounter the atmosphere. But they aren’t on a spectrum visible to the naked eye.

An actual aurora works like this: particles from the sun hit Earth’s upper atmosphere, the magnetic field pushes them either into the northern or southern regions. Here, they smash into oxygen or nitrogen atoms, releasing energy in brilliant streaks of light.

Steve isn’t a proton arc at all but a gas ribbon burning at 5,400 Fº (3,000 Cº) 186 miles (300 km) above the Earth. These gases just happen to burn hotter than those surrounding it. Because it’s a gas and not particles in the ionosphere, Steve isn’t technically an aurora. 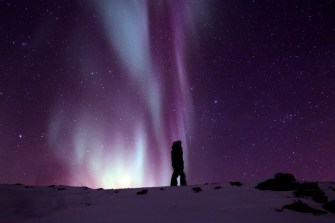 Citizen scientists were the first to discover “Steve.” Getty Images.

In a letter to the ESA, Donovan wrote, “It turns out (an aurora like) Steve is actually remarkably common, but we hadn’t noticed it before.” He added, “It’s thanks to ground-based observations, satellites, today’s explosion of access to data and an army of citizen scientists joining forces to document it.” The Alberta Aurora Chasers named it Steve, after the kid’s move Over the Hedge, where characters who are afraid of something call it Steve to remove its unfamiliarity and so, not be afraid anymore.

Though it hasn’t been officially named, some scientists are pushing for the acronym STEVE standing for: “Strong Thermal Emission Velocity Enhancement.” This is to honor the citizens who through their interest and social media interactions led to its discovery. Donovan said the phenomenon wouldn’t have been discovered if it weren’t for the Facebook page. “We really are in a truly new era,” he said. That’s an era where anyone who has an interest and put in the time to share their findings on social media, can help bring a strange phenomenon of nature to light, and maybe even name it.

New research on Uranus’ magnetosphere could help scientists learn about distant systems, and refine the ways they search for alien life.
Up Next
The Present

People Are Aggressively Prejudiced If They Think They Won’t Get Caught, Study Finds

A study suggests people act aggressively on their prejudices when they have plausible deniability.