Drone strikes have increased by a large degree in this administration as compared with President Barack Obama’s. With the removal of certain limitations to drone strike policy, it’s about to get worse.

In a controversial move, earlier this year, Google signed on to something called Project Maven, which is attempting to use artificial intelligence to classify objects in drone photographs into categories like ‘person’ and ‘car’, for example.

In response, employees have filed an internal petition that is now at 4,000 signatures. It reads, in part:

“We cannot outsource the moral responsibility of our technologies to third parties. Google’s stated values make this clear: Every one of our users is trusting us. Never jeopardize that. Ever. This contract puts Google’s reputation at risk and stands in direct opposition to our core values. Building this technology to assist the US Government in military surveillance—and potentially lethal outcomes—is not acceptable.”

At least 12 employees so far have resigned from the company to object not only to how the contract with the U. S. Defense Department came about but also because of other concerning moves by the company, including sponsoring the Conservative Political Action Conference and Google’s failure to address internal diversity concerns.

“At some point, I realized I could not in good faith recommend anyone join Google, knowing what I knew. I realized if I can’t recommend people join here, then why am I still here?” a resigning Google employee said. 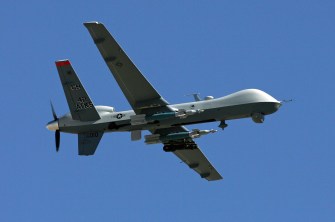 CREECH AIR FORCE BASE, NV – AUGUST 08: An MQ-9 Reaper takes off August 8, 2007 at Creech Air Force Base in Indian Springs, Nevada. The Reaper is the Air Force’s first ‘hunter-killer’ unmanned aerial vehicle (UAV), designed to engage time-sensitive targets on the battlefield as well as provide intelligence and surveillance. (Photo by Ethan Miller/Getty Images)

For its part, Google claims it is “only” providing open-source software to the project… in addition to payment and technical assistance, of course. And it claims—somewhat unbelievably—that its A.I. will not be used to kill people.

It’s an interesting position for Google to be in. Generally, Google encourages healthy internal debate about product direction and how that impacts employees. This time, it’s been less than forthcoming about its role and contract with the U. S. Defense Department on Project Maven. Also, it’s attempting to win a bid to work on the Joint Enterprise Defense Infrastructure, or JEDI. That contract could be worth billions of dollars.

Google is apparently headed down a path it hasn’t been before, especially since it became the behemoth company it is now.

Just today, more than 90 academics in artificial intelligence, ethics, and computer science have signed on to an open letter that calls on Google to end its work on Project Maven. It ends with:

“We thus ask Google, and its parent company Alphabet, to:

And here’s Big Think’s interview with Mary Ellen O’Connell about the nature of drone warfare.

The science fiction dream of a traversable wormhole is no closer to reality, despite a quantum computer’s suggestive simulation.
Up Next
Culture & Religion

These are the occupations that attract the most serial killers and psychopaths.