Strawberries can be easy to grow – especially, it seems, if you’re an algorithm.

When farmers in China competed to grow the fruit with technology including machine learning and artificial intelligence, the machines won, by some margin.

The technologists also outperformed farmers in terms of return on investment by an average of 75.5%

The inaugural Smart Agriculture Competition was co-organized by Pinduoduo, China’s largest agri-focused technology platform, and the China Agricultural University, with the Food and Agriculture Organization of the United Nations as a technical adviser.

In the competition, the technology teams had the advantage of being able to control temperature and humidity through greenhouse automation, the organizers said. Using technology such as intelligent sensors, they were also more precise at controlling the use of water and nutrients. The traditional farmers had to achieve the same tasks by hand and experience.

One of the teams, Zhi Duo Mei, set up a company to provide its technology to farming cooperatives after it generated a lot of interest during the competition.

The contest helped the traditional farmers and the data scientists better understand each other’s work and how they could collaborate to everyone’s advantage, the leader of the Zhi Duo Mei team, Cheng Biao, said. 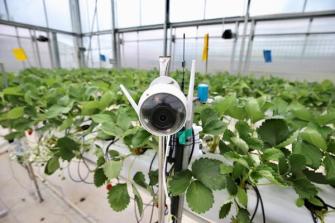 By 2035, labour productivity in developed countries could rise by 40% due to the influence of AI, according to analysis from Accenture and Frontier Economics.

Sweden, the US and Japan are expected to see the highest productivity increases.

Emerging technologies including AI and drones will also play a vital role in helping the world recover from COVID-19, according to a separate Forum report compiled with professional services firm Deloitte.

When you hold yourself financially accountable, you’re likely to gain more than just some extra money.
13.8

Synthetic biology has the power to cure and kill. Have we learned from our past mistakes?
Progress

After 20 months, scientists find lab-dish brain cells matured at a similar rate to those of an actual infant.