PayPal CEO Dan Schulman sees a silver lining amid the chaos of the COVID-19 pandemic: It’s accelerating cryptocurrency adoption at a rapid clip, potentially by years.

Speaking in front of a digital audience at the 2020 Web Summit, Schulman added that he’s optimistic about the future of cryptocurrencies:

“I think that if you can create a financial system, a new and modern technology that is faster, that is less expensive, more efficient, that’s good for bringing more people into the system, for inclusion, to help drive down costs, to help drive financial health for so many people. […] So, over the long run, I’m very bullish on digital currencies of all kinds.”

His bullishness might be unsurprising, considering PayPal is among the latest fintech companies to move into the cryptocurrency space. In October, PayPal announced that users would soon be able to buy, sell, and hold cryptocurrencies “directly through PayPal using their Cash or Cash Plus account.” That went into effect in November, and the company plans to extend it to Venmo users in 2021. 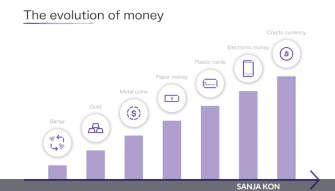 Presentation slide from Sanja Kon’s presentation on the evolution of money at 2020 Web SummitCredit: Sanja Kon

The move came shortly after the payments company Square invested $50 million into Bitcoin, and after Fidelity announced that it was opening a Bitcoin fund into which qualified purchasers could invest (minimum investment: $100,000). Together, this institutional backing might have something to do with Bitcoin’s recent surge back to near its 2017 price peak of $19,783. (Bitcoin is listed at 19,384.30 as of Dec. 3.) 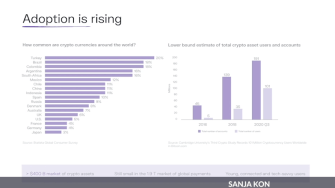 Presentation slide from Sanja Kon’s presentation on the evolution of money at 2020 Web SummitCredit: Sanja Kon

But more importantly, it suggests cryptocurrencies might soon have the opportunity to prove themselves in real-world use cases. After all, skeptics have long doubted the ability of cryptocurrencies to go mainstream as a form of everyday payment. But people seem increasingly comfortable with digital payment systems.

“Physical cash is becoming more and more obsolete. And the next step in the evolution is digital currency.”

Kon noted some of the inherent advantages of cryptocurrencies, namely ownership.

“For many people, this is really the main benefit of cryptocurrency: Users owning cryptocurrencies are able to control how they spend their money without dealing with any intermediary authority like a bank or a government, for example,” Kon said, adding that there are no bank fees associated with cryptocurrencies, and that international transaction fees are significantly lower than wire transfers of fiat currency.

Still, it could take years for people to start using cryptocurrencies for everyday purchases on a large scale. Despite this, many cryptocurrency advocates see digital currencies, particularly Bitcoin, as a way to store value—digital gold, essentially.

“I don’t think Bitcoin is going to be used as a transactional currency anytime in the next five years,” billionaire investor Mike Novogratz recently told Bloomberg. “Bitcoin is being used as a store of value. […] “Bitcoin as a gold, as digital gold, is just going to keep going higher. More and more people are going to want it as some portion of their portfolio.”

There are obvious parallels between gold and Bitcoin: Both are mined, do not degrade over time, are finite in supply, and aren’t directly tied to the value of fiat currency, making them relatively invulnerable to inflation. The obvious objection is that the price of Bitcoin, and cryptocurrencies in general, is far more volatile than gold.

But for investors who believe the inherent value of cryptocurrency technology will prove itself over the long term, these price fluctuations are just bumps on the long road to the future of currency.

“It’s no longer a debate if crypto is a thing, if Bitcoin is an asset, if the blockchain is going to be part of the financial infrastructure,” Novogratz said. “It’s not if, it’s when, and so every single company has to have a plan now.”

The Rubbee X requires almost no setup and is far cheaper than a brand new e-bike.
Up Next
The Present

Singapore has approved the sale of a lab-grown meat product in an effort to secure its food supplies against disease and climate change.