Scientists discovered a new feature that makes humans distinct from other primates like chimpanzees. The research shows that the human body uses 30 to 50 percent less water per day than our closest animal relatives.

Certainly, our brain power and the ability to walk upright are key in making us special, but the efficiency with which the human body uses up water is another major difference. This characteristic likely came about as an evolutionary adaptation in ancient hunter-gatherers, who had to venture out further and further from water sources in search of food, thinks the study’s lead author Herman Pontzer, associate professor of evolutionary anthropology at Duke University.

“Even just being able to go a little bit longer without water would have been a big advantage as early humans started making a living in dry, savannah landscapes,” Pontzer said.

As our body constantly gets rid of water through processes like urinating or sweating, it is necessary for the water levels to be restored. “To sustain life, humans and other terrestrial animals must maintain a tight balance of water gain and water loss each day,” as the paper’s authors write.

For the study, the researchers looked at this cycle of water consumption and loss in 309 people from a variety of backgrounds. These included farmers, hunter-gatherers, and office workers, who were compared to 72 apes spread around zoos and sanctuaries. 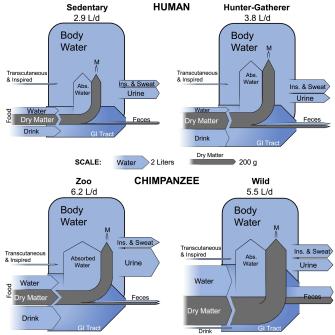 A model of water turnover for humans and chimpanzees who have similar fat free mass and body water pools.Credit: Current Biology

The scientists calculated the water intake of each person in the study, whether it came from drinks or food. They also tracked how much water was lost through urine, sweat or the GI tract. With all the numbers added up, it became clear that an average person’s body goes through about 3 liters of water every day. That’s about 12 cups. A chimp or a gorilla goes through twice as much.

The results were surprising because humans tend to sweat more than other primates. In one square inch of skin, “humans have 10 times as many sweat glands as chimpanzees do,” explained Pontzer. We can sweat out about a half gallon in a 30-minute workout. We also lead much more active lives than the apes at the zoo, with most apes only moving a couple of hours a day, according to the scientists. So how is it that we use up so much less water?

The researchers believe that the very real difference in water processing they observed in humans compared to other primates is related to evolutionary mechanisms. Our bodies had to adjust to need less water to stay healthy.

The scientists are now focused on figuring out how exactly this change occurred. The data suggests that our sense of thirst diverged from other ape relatives. We just don’t want so much water. Notably, the ratio of water-to-calories is 25 percent less in human breast milk than in ape milk.

It is also possible that our nose has a lot to do with this. Fossils point to the fact that humans started to get more protruding noses than its evolutionary cousins about 1.6 million years ago, with the dawn of Homo erectus. In contrast, gorillas and chimp have flatter noses.

What’s good about our noses? Since we tend to breathe out water vapor, the nasal passages actually cool and condense it, turning it back into liquid. This liquid gathers inside the nose and get reappropriated back into the body. Essentially, having a nose that juts out likely helped ancient humans keep more moisture when breathing.

Starts With A Bang Podcast #67 — Astroparticles And Dark Matter

Dark matter was thought to be cold and collisionless. But maybe that’s not the full story.If you look out at the Universe and measure all the matter out there, including stars, […]