For decades, the mortality rate across the US was in decline. That’s why the results of a 2015 report were so shocking. For the first time in generations, middle-aged white people saw their death rate increase. Husband and wife economists Anne Case and Angus Deaton discovered this disturbing trend, which began back in 1999. The researchers labeled these “deaths of despair,” resulting from suicide, drug or alcohol abuse.

Approximately 40,000 people take their own lives each year in the US. A new book tries to isolate the origins of the uptick, currently at a 30-year high, and what can be done. The upward trend was found in all age groups, absent the elderly. Now a new book is lending greater insights into this most personal of tragic acts. It’s entitled Explaining Suicide: Patterns, Motivations and What Notes Reveal. The authors say this is the first sweeping, analytical attempt to understand the motivations behind the act, across different age groups.

To conduct the study, which would form the basis of the book, researchers examined suicide datasets extensively, including from places as far away as Europe and Oceania. They also collected 1,280 suicide notes from coroner’s offices across Southwestern Ohio, written between 2000 and 2009. These weren’t all notes in the literal sense. Many were pictures of notes written on mirrors, towels, coffee filters, and more. One man even spray painted his note on the floor of his barn.

Last words such as these are only found in 14% of cases. The authors began to notice differences between note leavers and non-leavers in their research, as well as people who attempt suicide and those who complete the act. They believe these findings could help develop better suicide prevention strategies. 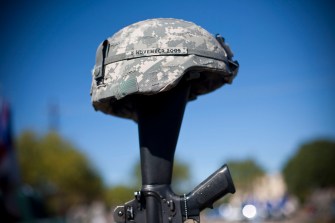 20 US veterans commit suicide each day, according to a 2016 Veteran’s Affairs (VA) report. Getty Images.

The academics also evaluated motivating factors, and to what extent each is capable of pushing a person toward suicide. These included: mental illness, substance abuse, interpersonal violence, physical pain, grief, and feelings of failure. They also explored what factors may help protect one against suicide, and make them more resilient. Meyer said after reading all the notes and examining the data, she knew they had a book on their hands.

Many notes were addressed to one person. Others were to no one in particular. There was even someone who addressed the note to their dog. Meyer said it’s hard to understand why some people leave a note and others don’t. According to their research, it all comes down to what motivated the suicide.

There is a faction of note leavers who lash out at the person or group who controlled, manipulated, neglected, or abused them. But most absolve loved ones of any guilt. 70% were motivated to escape overbearing pain, be it physical or psychological. Nowadays, being a white male is the single biggest risk factor. Why is that? According to Case and Deaton, drastic changes in the labor market is the most significant factor. Meyer claims another driver.

“Hegemonic masculinity,” or a perception that heightened masculinity must be portrayed at all times, a goal that no male can live up to. Sooner or later everyone needs to be vulnerable and let their emotions out. This inability to fit into such a rigid framework causes psychological pain in the form of guilt, shame, disgust, and self-hatred. This builds to the point where the person can no longer take it.

Another 23% of note writers ended it all due to unrequited love or love lost. 22% said they themselves created the problem which led to their decision. This includes the loss of a job, a breakup or divorce, legal troubles, arrest or an impending jail sentence, a looming financial problem, or a devastating medical diagnosis. Meyer says there’s a correlation between legal troubles and taking one’s own life. “There is a really strong tie between things like DUIs and killing yourself,” she said. 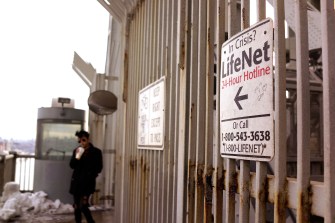 Suicides off of the George Washington Bridge in NYC doubled in 2015, with one occurring every 3.5 days. Getty Images.

The vast majority of notes absolved love ones, saying nothing could have been done to prevent the act. Most people who commit suicide find their own pain too overwhelming to bear. About a third of the notes mention religion, faith, or God. More women left notes than men. And oddly enough, more of the notes were written on the first of the month than any other day.

It’s unfortunate that many people have been touched by suicide in one way or another, yet most are resistant to talking about it. The authors hope the book will help those who are wrestling with it, or who have been hurt by someone who committed it, to speak out, and seek help. So what can we do to help lower instances of suicide? Meyer suggests limiting access to guns, dangerous pharmaceuticals, and other common means.

She also thinks everyone should take a course, much like how we go through “driver’s ed.” to acquire a driver’s license. Every student would be taught to recognize the warning signs and know how to get the person the help they need. Adults in higher or continuing education or the elderly in senior centers could also be offered such a course.

The biggest preventative aspect according to Meyer, rather than sense of resiliency, is acquiring more social connections and developing one’s own sense of purpose. Those who feel isolated or adrift are more likely to consider suicide. “Part of it is the responsibility of the individual, but part of it is our responsibility of keeping that person connected,” she said. We usually perceive the warning signs, but don’t feel it’s right to interfere.

“In the coroners’ reports that we viewed, many people had called for welfare checks on their loved ones. They knew or feared that the person had harmed or killed himself or herself. If the impulse to intervene had occurred at an earlier point, the suicide might have been interrupted and averted. We must learn to trust our guts and to get past our own fears when someone is in trouble and in need of help.”

Meyer and colleagues also propose a national prevention plan, to foster a sense of community and social support. Here, counselors should push for healthy lifestyle changes and the application of each person’s precious gifts in a particular direction.

If you feel suicidal, or are concerned for a friend, don’t wait: talk to someone, or learn about suicide prevention here. To know more about the connection between depression and suicide, click here:

This scientist collected thousands of secrets. They all had 3 things in common.
▸
7 min
—
with
Michael Slepian
Up Next
The Past

Can the Trump-Russia Scandal Really End in Treason Charges?

Charges of treason are often used incorrectly in today’s political climate. Treason has a very specific definition in the U.S. Constitution.