Americans’ pride in the U.S. is at its lowest point since 2001, according to a new Gallup survey.

For the survey, Gallup conducted telephone interviews between June 3 to 16, 2019, with a random sample of 1,015 adults across all 50 states. The surveyors asked respondents to rate their pride in the U.S. — both overall and in specific national domains, such as the U.S. military, scientific achievements, and political system.

“The highest readings on the measure, 69 percent and 70 percent, were between 2002 and 2004, after the 9/11 terrorist attacks, when the American public expressed high levels of patriotism and rallied around the U.S. government,” Gallup staff wrote. “Yet, since the start of George W. Bush’s second presidential term in 2005, fewer than 60 percent of Americans have expressed extreme pride in being American.” 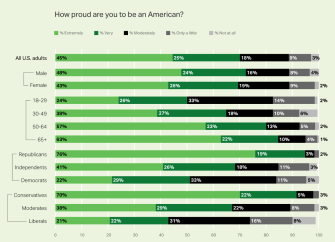 Gallup’s 2019 survey is its first to include a question measuring American pride in eight aspects of U.S. government and society. 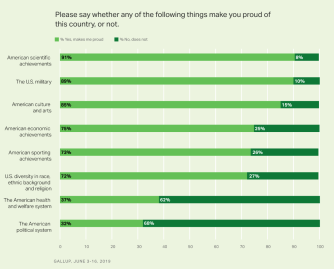 American pride might be diminished, but the country’s Independence Day celebration in Washington, D.C. is set to be one of the biggest – and potentially the most controversial and expensive – in U.S. history.

These are the top 10 emerging technologies of 2019

A glimpse into what a sustainable, inclusive future will look like.