Finding room for “me time” during a stressful work week is no simple task. But in some places it’s easier than others, according to a recent study.

Security company Kisi surveyed 40 cities around the world to discover where residents have the best work-life balance, scoring based on employment factors, such as average commute times, working hours and holiday leave, along with wellbeing and civic rights. 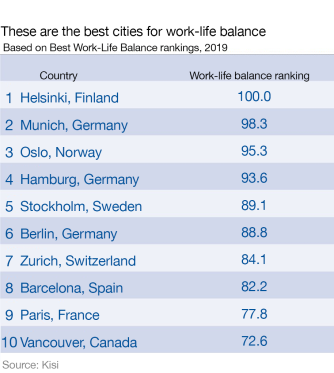 These are the cities with the best work-life balance.

Minimum holiday leave is 30 days, which is one of the highest of any country in the survey. Helsinki also offers generous paid parental leave, which at 1,127 days, is far more than other countries, with the exception of Hungary.

The first of three German cities in the top 10, Munich is the lowest-stress city on the list. The average work week is longer than Helsinki’s by just one hour, and commute times are longer by one minute.

There are some pronounced differences between the top two cities. In the Bavarian capital, minimum holiday leave is just 20 days, though most employees take almost 30 days on average. Parents can take 406 days of paid leave, about one-third the time they can take in Helsinki.

Of the cities surveyed, Oslo residents work the fewest hour per week (38.9), and only a small percentage of people work more than 48.

The city provides generous paid leave for parents and has the highest gender equality score of all cities surveyed, followed by Stockholm and Helsinki. It also leads the way in access to mental health services.

Like Munich, Hamburg has a 41-hour work week and is a relatively low-stress place to live and work, although not quite as safe.

Germany is the only country with more than one city in the top 10. All three of those cities have short work weeks balanced with family-friendly policies. Leisure plays an important role in the lives of Germans. 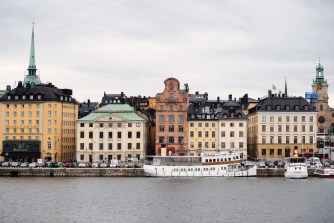 Photo by Jon Flobrant on Unsplash

Stockholm scored 76.9 for gender equality, the second highest in the survey. This is partly due to flexible working hours and the structure of parental leave. Social equality is high throughout the city, too, with LGBT+ equality reaching 100%.

Employees in Berlin arrive for work around 10am on average, later than the other German cities in the top 10, but still ahead of many other places in the list. The average commute is marginally longer, but stress levels in Berlin are more than double those of Hamburg and more than three times higher than in Munich.

In Zurich, people work the longest hours of any city in the top 10 and experience some of the longest commutes.

Access to mental health services is the second best, however, and the city enjoys one of the lowest stress levels, topped only by Munich.

Switzerland’s most populous city has low air pollution and leads the survey in terms of the wellness and fitness of its residents. 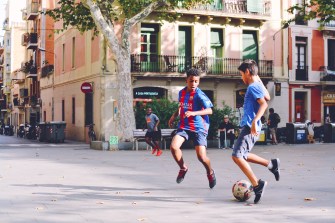 Photo by Mosa Moseneke on Unsplash

There is pressure to do away with the tradition of long lunches and afternoon siestas in some Spanish cities. In Barcelona, workers put in almost 41 hours each week, which is much the same as the other places in the top 10.

When they are not working, the city’s residents take more holidays than those in other cities, with an average of 30.5 days, higher than the required minimum of 22 days.

Workers in the French capital have the longest commute time among the top 10, at an average of 44 minutes, compared with 26 minutes in Helsinki. But both cities share a generous holiday allowance of 30 days.

Legislation requires France to actively promote a healthy work-life balance. The work week is capped at 35 hours and employees can choose not to send or receive after-hours work emails.

Vancouver is the only city outside Europe in the top 10. For most residents, the commute to work takes just over half an hour. And the work week is around 40 hours – similar to most others in the top 10.

Like their neighbour the United States, however, Canadians have limited paid holiday leave – Vancouver residents have just 10 days’ paid leave, though residents take more than 15 on average.

On New Year’s Eve 1899, the captain of this Pacific steamliner sailed into history. Or did he?
Strange Maps

From questionable shipwrecks to outright attacks, the Sentinelese clearly don’t want to be bothered.
The Present

Break into London Zoo? Illegal, but it would improve the London Circle Walk
Up Next
Neuropsych

Kama muta: A new term for that warm, fuzzy feeling we all get