I certainly remember that feeling when I was young: The dreaded Friday that report cards went home. My grades were mostly good, though there would inevitably be that class I lagged behind in. And as our brains are constructed, we focus on outliers, not the string of victories. The D among the As and Bs became the focal point.

As it turns out, some kids have more to fear than others. That’s what caused Dr. Melissa Bright to conduct research on the day report cards were sent home. She had been told disturbing information by her peers: Child abuse spikes when sent home on Fridays. She couldn’t find any studies documenting this, so she conducted her own.

Turns out the anecdote was true.

On Saturdays following report card Fridays, cases of child abuse verified by the Florida Department of Children and Families were four times higher than other Saturdays. When report cards were issued earlier in the week, however, there was no increase in abuse cases.

Spanking Harms Children, According To The American Academy Of Pediatrics | TIME

Spanking harms children, according to the American Academy of Pediatrics | TIME

Bright, at the University of Florida’s Anita Zucker Center for Excellence in Early Childhood Studies, teamed up with Dr. Randall Alexander, at Jacksonville’s UF College of Medicine, to lead a team of scientists for this research. Looking at 1,943 documented cases of abuse during a 265-day window, they discovered a four-fold increase when report cards were sent home on Friday.

This study focused on children ages five to eleven in 64 of 67 Florida counties during the 2015-16 academic year. Over that stretch from September to May, a total of 167,906 calls were made to the child abuse hotline for children in that age group.

As the researchers note, a whopping 75-95 percent of parents use corporal punishment—physical punishment such as spanking, paddling, flogging, or caning—as a means of disciplining children between the ages of two to eight.

Corporal punishment is legal throughout most of the world; as of last year, a total of 58 countries have banned it, mostly in Europe and South America. Sweden was the first, in 1979, followed soon after by Finland and Norway. More recent countries include Mongolia, Slovenia, and Paraguay. The United States is not on this list. In 2014, a public school student in America was hit, on average, every 30 seconds. 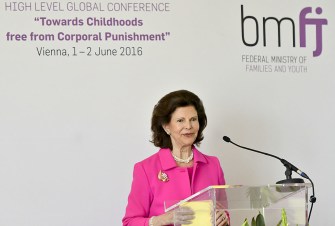 Queen Silvia of Sweden holds a speech during the conference ‘Towards Childhoods free from Corporal Punishment’ on June 1, 2016, in Vienna, Austria.

In schools, corporal punishment is more regulated. Over 100 countries have banned it outright, though it remains legal in 19 US states. Each year, 160,000 public school children throughout America can legally be physically punished by school personnel, almost exclusively in the South. Except for New Jersey and Iowa, such punishment is legal in private schools.

Given that this form of abuse is sanctioned throughout the country, Bright offers the simplest imaginable fix to school districts: Don’t send home report cards on Friday. The team speculates that earlier in the week parents and caregivers are focused on work and household duties. Since the work week ends for many adults on Friday, they turn their energy toward their children, placing them in harm’s way.

I have to feel like my research can really make a difference. That’s why I like working with pediatricians and teachers. They’re hungry for data to make things better, and I’m excited to use my research knowledge to give them those answers.

Symbolic gestures often speak to our psyche in ways no rational action could ever speak to our intellect.
Up Next
Hard Science

Can all three co-exist?