Hundreds of studies involving research on organ transplant recipients in China might have violated ethics standards, according to a new study that’s called for the retraction of more than 400 published scientific papers.

Published in the journal BMJ Open, the study suggests that thousands of organs used for transplants in China likely came from condemned prisoners, and that past research has largely failed to investigate this possibility. As study authors Wendy Rogers and Matthew Robertson wrote in an article published by Newsweek, this violates international professional standards that say journals shouldn’t publish research that:

However, studies that fail to meet these criteria still get published. The study examined 445 papers, which detailed more than 85,000 organ transplants, published in peer-reviewed English-language journals between 2000 and 2017, finding that: 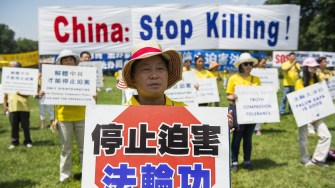 The Communist Party of China has persecuted Falun Gong since 1999. Hundreds of thousands of Falun Gong members have been unlawfully imprisoned, subject to torture, psychological abuse, and forced labor. They are thought to be a source of China’s illegal organ harvesting trade.

The Chinese government says about 10,000 organ transplants occur in the nation each year, and that these come from the “largest voluntary organ donation system in Asia.” But there doesn’t seem to be any evidence that such a large-scale voluntary donation program exists (for example, in 2010 China’s official number of voluntary donors was 34), and a 2016 report suggested the real number of annual donations is somewhere between 60,000 and 100,000.

What explains the discrepancy? The authors of the recent study suggest China has been harvesting organs from condemned prisoners and prisoners of conscience, which may include Falun Gong members, Uighur Muslims, Tibetan Buddhists and some Christians.

China has long been accused of facilitating a network of organ harvesting and trafficking, a claim that’s supported by eyewitness testimony, shady government data and the relative ease with which recipients can buy organs in the country, while in most developed nations patients wait months. In 2015, China promised not to harvest organs from executed prisoners, though there’s been no new laws or regulations passed that suggest the practice isn’t taking place.

​Scientists should be held responsible, too

The authors of the recent study argue that researchers and publishers should strictly adhere to ethical standards when conducting research involving organ transplants, and they’ve called for the mass retraction of all published work that fails to meet ethical standards.

“When a paper is published without identifying the source of the transplanted organs, it risks sending the message that ethical standards may be ignored or breached,” the researchers wrote for Newsweek. “This undermines the incentive to comply with these standards in the future.”

The Canadian professor takes issue with blocking free speech, but is he part of the problem?