In 2017, conflict was stronger between red and blue than it was between black and white.

The respondents didn’t, however, report feeling nearly as strong of a conflict between rural and urban Americans – a dichotomy that some suggested played a role in the election of President Donald Trump – with only 37 percent saying there were strong or very strong conflicts between the groups. 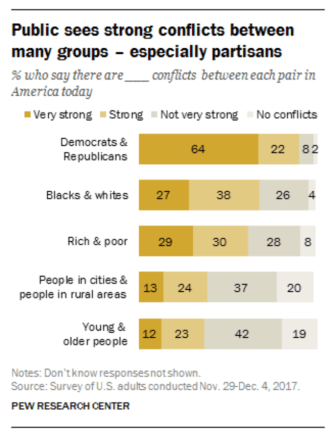 Both conservatives and liberals felt the discord: 90 percent of Democrats and 86 percent of Republicans reported a sense strong or very strong conflicts, representing a higher total rate than Pew Research Center recorded for 2016 or 2012. And the two parties appear to be more divided than ever when it comes to fundamental political issues. Pew Research Center reports that:

On 10 questions that the Center has asked in surveys since 1994 through summer 2017, the average gap between Democrats and Republicans has risen from 15 percentage points to 36 points. This gap is now much wider than the average gap on the same questions between people of different races, ages, educational backgrounds and other demographic factors. 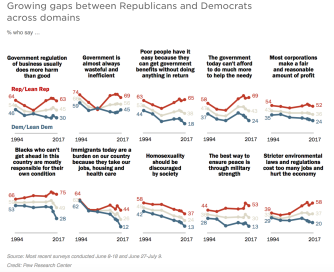 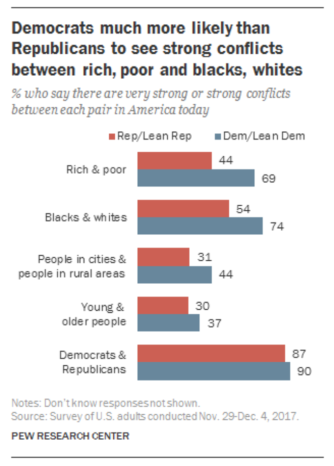 Making matters more complicated is the division and infighting within the two parties. In October 2017, the Pew Research Center published a report that describes the subgroups that have taken shape within each party in the wake of President Donald Trump’s election.

Solid Liberals – “Largely white, financially comfortable and highly educated (most are college graduates and nearly a third have postgraduate degrees), Solid Liberals overwhelmingly express liberal attitudes on virtually every issue.”
Opportunity Democrats “Agree with Solid Liberals on major issues. But Opportunity Democrats are less affluent, less politically engaged and less liberal – both in their attitudes on issues and in how they describe themselves politically.”
Devout and Diverse “[this group] faces even tougher financial hardships than Disaffected Democrats. Devout and Diverse also are the most politically mixed typology group (about a quarter lean Republican), as well as the least politically engaged.”
Disaffected Democrats “have very positive feelings toward the Democratic Party and its leading figures. Their disaffection stems from their cynicism about politics, government and the way things are going in the country. This financially stressed, majority-minority group supports activist government and the social safety net, but most say government is ‘wasteful and inefficient.'”

And on the right:

Core Conservatives – are “in many ways the most traditional group of Republicans” and are “financially comfortable, male-dominated group overwhelmingly supports smaller government, lower corporate tax rates and believes in the fairness of the nation’s economic system.”
Country First Conservatives – represent a “much smaller segment of the GOP base, are older and less educated than other Republican-leaning typology groups. Unlike Core Conservatives, Country First Conservatives are unhappy with the nation’s course, highly critical of immigrants and deeply wary of U.S. global involvement.”
Market Skeptic Republicans – “support raising tax rates on corporations and large businesses. An overwhelming share (94%) say the economic system unfairly favors powerful interests, which places the view of Market Skeptic Republicans on this issue much closer to Solid Liberals (99% mostly unfair) than Core Conservatives (21%).”
New Era Enterprisers – “are fundamentally optimistic about the state of the nation and its future. They are more likely than any other typology group to say the next generation of Americans will have it better than people today. Younger and somewhat less overwhelmingly white than the other GOP-leaning groups, New Era Enterprisers are strongly pro-business and generally think that immigrants strengthen, rather than burden, the country.”

Check out more about the subdivisions within each party in Pew Research Center’s exhaustive report.

A program in Brazil both helped and harmed. What can we learn from it?
Up Next
Personal Growth

How can we keep our brains in top form? Here are some powerful activities you can do immediately.