Discrimination has long been an ugly human trait. Bias served an important role over the long course of evolution — “Is this friend or foe approaching?” — but this social and biological construct has largely failed us over the last few centuries.

In an age of instantaneous global connectivity the case for diversity is stark, yet the chains of the past still bind us.

That’s the consensus of a new poll, at least, by the Public Religion Research Institute (PPRI), a nonprofit, nonpartisan research and education organization that specializes in identifying trends in religious life and belief. This wide-ranging survey discovered that bias against atheists and the LBGT community still runs high; on the flip side, negative feelings toward the religious remains problematic, with more atheists believing it kosher to discriminate against the faithful.

The survey centers on a single question: Is it okay to refuse business to a person of [race/belief]? This updated poll (the last was in 2014) follows an infamous case of a Colorado baker that went all the way to the Supreme Court, which ruled in his favor: yes, on religious grounds someone gay can be refused service. The baker is now being sued for a third time, the latest due to his refusal for creating a gender transition cake.

Transgenders are also included in the PPRI survey, along with gays and lesbians, atheists, Jews, Muslims, and African Americans, representing a broad swath of groups to discriminate against — belief, ethnicity, race, and sexual orientation all on the table.

While this might seem a hodgepodge of groups to clump together, the broad topic of “service refusal” offers disturbing (yet also somewhat hopeful) clues into how the human mind invents and then swears by categorization. The survey was conducted by randomly interviewing 1,100 American adults over the age of 18 in April, 2019. Texas is oversampled in this poll, with 150 respondents living in that state.

The good news is that the majority of Americans do not feel it right to discriminate on any grounds. Yet the trend lines reveal a more troubling narrative: in every group, more Americans feel it justified to refuse service in 2019 than just five years earlier. 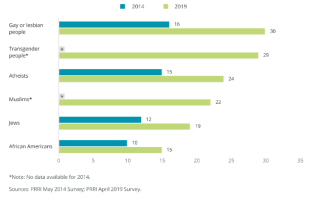 While there is a growing number of atheists, “nones,” and liminals in America, nearly a quarter of respondents (24 percent) claim that it’s okay for business owners to refuse to serve atheists. Though the focus should be on the 72 percent of Americans that disagree, there is one disturbing trend: the nays are up nearly 10 percent since 2014, when only 15 percent of respondents felt the same. Religious backlash or oversampled Texas? Difficult to gauge.

Republicans remained the most anti-atheist group, with 37 percent giving a thumbs up to discriminating against nonbelievers. Independents came in at 21 percent and Democrats at 17 percent. The big shift is in Republicanism, as only 19 percent felt the same in 2014. 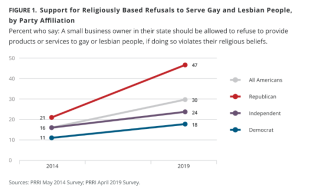 While every group feels discriminated against in some capacity in a time when everyone has a platform to argue such, over the last decade gays and lesbians have led the charge in fighting back against a history of persecution, jailing, and murder. Still, nearly a third of Americans (30 percent) believe it is fine for business owners to not serve them.

While Republicans are leading the polls (47 percent versus 21 percent in 2014), Independents and Democrats are also more biased today than just a half-decade ago, pushing the overall number up from 16 percent to 30 percent.

There was no poll for transgender people in 2014, showing just how quickly this topic has arisen in popular American consciousness. The numbers discriminating against the transgendered is comparable to gays and lesbians, with 29 percent of Americans giving a thumbs up to discriminatory behavior. Men were more biased in this regard (34 percent versus 24 percent of women), with Republicans landing at 44 percent, Independents at 25 percent, and Democrats at 19 percent. 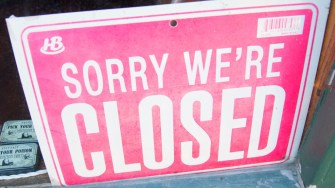 Antisemitism is a growing concern in our world. While it has always been a problem (as thousands of years of texts describe), you’d think we would have learned the lesson we needed eighty years ago. Not the case.

Discriminating against Jews is up seven percent since 2014, landing at 19 percent this year. The charge is once again led by Republicans at 24 percent, followed by Democrats at 17 percent. Independents clocked in one point behind Democrats.

Muslims were also not included in the 2014 poll. In 2019, they were slightly less biased against than atheists, slightly more than Jews, landing at 22 percent. As with every other category in this poll, men were more likely to favor discrimination than women (25 versus 20 percent), while 32 percent of Republicans, 20 percent of Independents, and 14 percent of Democrats are in favor of not serving them if the business owner felt that okay.

Of all the groups polled, it might bring a certain sense of comfort that African Americans were the least discriminated against group, as this is the only category based purely on race. That said, like the other trend lines, we have a lot of work to do. Favor of discriminating against blacks rose 50 percent, from 10 percent to 15 percent in 2019. The biggest leap in bias occurred amongst white evangelical Protestants, up from 8 percent in 2014 to 22 percent this year.

A program in Brazil both helped and harmed. What can we learn from it?
Strange Maps

A cartogram makes it easy to compare regional and national GDPs at a glance.
Thinking

Greed and the philosophy of wealth

When does a healthy desire for wealth morph into greed? And how can we stop it?
The Past

Modern society is as unequal as 14th century Europe

As bad as this sounds, a new essay suggests that we live in a surprisingly egalitarian age.
Thinking

Seek pleasure and avoid pain. Why make it more complicated?
Up Next
Starts With A Bang

Meet The Largest X-Ray Jet In The Universe