Just over halfway through their concert in Los Angeles last week, Bristol-based Massive Attack played a cover of Pete Seeger’s “Where Have All the Flowers Gone?” The eclectic set included renditions of The Cure, Bauhaus, The Velvet Underground, even Avicii, as well as the entirety of the band’s landmark record, Mezzanine. Yet the ambient, acoustic Seeger cover, featuring Liz Fraser on vocals, was unique not only for its sonic temperament, but also the visual montage displayed on the Palladium’s three giant screens.

Growing out of the UK’s graffiti culture in the eighties, Massive Attack has always been political. Discomfort was on overload during Seeger’s somber track, with close-up videos of murdered civilians in Iraq and eerie clips of Trump and Putin merged into a single being. The tension was palpable, the crowd howling. The montage ended with a gaze at America’s opioid addiction as the band segued into “Inertia Creeps,” the perfect song for displaying “Oxycontin” and “Fentanyl” over and over in stark white letters over an ominous black background.

The message: Americans aren’t the best at self-reflection.

Unlike most musicians, the members of Massive Attack don’t address the crowd. No introductions or chatter about being happy to be performing. The music and mixed media does all the talking. As with the thick walls of sonic tension arising from the live renditions of trip-hop, the band has no qualms holding up a mirror to this society. The question is: Why are Americans so uncomfortable witnessing the price of our “freedom?”

Similar questions were put forward by Eric Weinstein to his latest podcast guest, former Navy SEAL Jocko Willink. During the two-hour conversation, the men discussed the consequences of the American public being shielded from the reality of war.

Discussing Vietnam on The Portal, Willink says that stepping back to look at the visuals of murder punches you in the stomach. It forces you to question the necessity of war, especially when it concerns the death of innocent civilians—an unavoidable fate. Willink isn’t claiming there should never be war—when needed, “go to war and win”—but visually seeing carnage forces a society to better understand the costs.

Weinstein believes we each have personal responsibility to investigate the consequences of our actions.

“I think that it is irresponsible of us as a nation to allow this much insulation of the home front from the raw facts of what we’re doing abroad. If you take my assessment that the United States is the most dangerous machine ever constructed, we do not have the right to wield that power if we’re not interested in what it looks like and what it means.”

A mature relationship with your country means recognizing the horrors your country perpetuates. It means knowing that any time your government deploys troops, some tragedies are going to occur within the population being attacked.

Willink replies that two forms of will are needed in war. The first is the will to kill, not only your enemy, but collateral damage as well. “If you think you can pull off a war without killing innocent people, you’re wrong.” This puts the onus of the “why” on every soldier’s shoulders. The reason behind the war has to be justified.

The will to die is also required. If you’re not prepared to face this potential outcome, “you have to stop and think about what you’re doing.”

Weinstein pivots to the media’s role in accurately portraying information to the public—including photographs. News outlets have long shied from the actual casualties of war even though, as Willink says, there are hundreds of thousands of photographs online of what we’ve done in Iraq.

Weinstein recalls the infamous “Falling Man,” which is making the rounds this week on the anniversary of 9/11, of one of the many people that jumped from the towers before they collapsed. He notes that it ran once in a morning edition, then was effectively banned from publication. “It didn’t become the iconic photograph of 9/11.”

Beyond the toppling statue of Saddam Hussein in Iraq, Americans have few visual memories of what we’ve been doing for nearly two decades (outside of the Abu Ghraib torture photos), whereas from Vietnam we have the same set of ten photos “seared into our minds.” Weinstein concludes,

“It seems to me that we’re developing a fragility as a people that is incompatible with our lethality.” 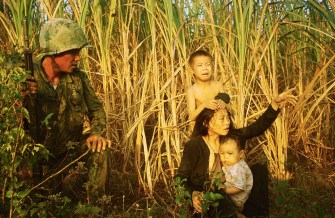 A soldier from the Korean White Horse Division, on an offensive north of Bong Son, kneels beside the bedraggled mother and children of a suspected Vietcong family, huddled at the edge of a field. Vietnam, 1966.

Weinstein then invokes the Mexican cartel drug wars on our southern border. In 2018, 35,000 people died in these undiscussed battles occurring just miles from our nation, yet few Americans understand the violence involved (or the ways in which America is implicated, such as our addictions fueling the illegal trade).

Willink states that it is likely that Americans are simply refusing to click on the links associated with these wars, though Weinstein holds the media accountable for refusing to publish them. If we were regularly shown what other nations are experiencing, perhaps our collective empathy could be invoked. Then we would hold politicians sending troops to war accountable. At the moment, that’s not happening on any broad level.

Instead, the media focuses on America’s interior bubbles, splitting every topic into left and right. Little is said of the protective glass covering the entire nation. We’d rather not look, so we’re not shown. Reality isn’t clickbaity enough. A vicious circle continues.

I’ve thought long about this topic, having practiced and taught yoga for decades. Inside of some studios you’ll hear the airiest of philosophies: the universe is conspiring in your favor, love is at the root of our nature, we’re peaceful at heart, and so on. Such sentiments could only be spouted in a culture of privilege. I often wonder how many yogis recognize that the only reason we’re able to spout these ideas is due to having the military force on the planet.

Historically, yoga and war were intertwined; one reading of the Bhagavad Gita is enough to recognize that. Amazingly, modern yogis cite those passages as pure metaphor, displaying blatant ignorance of the historical society that created that document. We rewrite the past to suit our present desires.

And that’s a shame, for all of us. Empathy is only possible through understanding. Media companies earn ad revenue from ego-driven clickbait, not the murder of innocent children trapped in the crossfire. Sadly, it appears the only way we learn is when wars occur on our soil—a reality we haven’t faced for over 150 years. Ignorance remains bliss for those doing the ignoring.

Paradoxically, we lose wars because the world is peaceful and the U.S. is powerful.
The Future

Think of a combination of immersive virtual reality, an online role-playing game, and the internet.
The Present

Instead of just Afghanistan, the U.S. military ought to withdraw from the entire Middle East and much of the rest of the world.
Strange Maps

Opponents of 19th-century American imperialism were not above body-shaming the personification of the U.S. government.
Up Next
Communication

Simon Sinek: What should your company culture be? Start with verbs.

Culture of a company is like the character of an individual,” says Simon Sinek in his Big Think+ video, “Starting with Why: Build a Culture by Design.” We know that […]