Hobby Lobby recently agreed to forfeit 5,500 rare artifacts that the company bought and arranged to have smuggled into the U.S. from Iraq. The company has also agreed to resolve the civil case by paying the government $3 million.

According to the civil complaint, Hobby Lobby has been amassing a collection of cultural artifacts from the Fertile Crescent since 2009. In July 2010, Hobby Lobby’s president, Steve Green, traveled with a consultant to the United Arab Emirates to inspect a collection of rare cuneiform tablets – clay tablets from ancient Mesopotamia that contain writing – that they intended to buy.

They eventually purchased the tablets and other artifacts by wiring payments totaling $1.6 million to seven different accounts. An unknown source then shipped the packages—which were labeled as clay or ceramic tiles and listed a false country of origin—to three Hobby Lobby locations in Oklahoma, where the company has its headquarters. 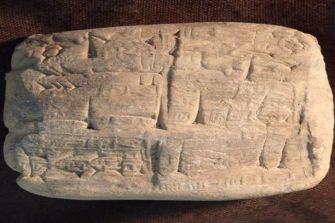 The complaint notes that Hobby Lobby went ahead with the purchase even after receiving the following warning from an expert’s memorandum in 2010:

I would regard the acquisition of any artifact likely from Iraq … as carrying considerable risk. An estimated 200,000-500,000 objects have been looted from archaeological sites in Iraq since the early 1990s; particularly popular on the market and likely to have been looted are cylinder seals, cuneiform tablets . . . . Any object brought into the US and with Iraq declared as country of origin has a high chance of being detained by US Customs.

Why exactly Hobby Lobby took such a risk is unclear, but some think the artifacts might have been headed to the soon-to-open Museum of the Bible, of which Green is the chairman and major supporter.

Green has already helped to collect some 40,000 artifacts set to be displayed in the museum when it opens this November, but the museum said in a statement that it has nothing to do with the recently forfeited artifacts:

The Museum of the Bible was not a party to either the investigation or the settlement. None of the artifacts identified in the settlement are part of the Museum’s collection, nor have they ever been.

But considering the artifacts are of the sort the museum intends to display, the highly publicized incident casts a cloud over the Museum of the Bible, as suggested by the Washington Post.

Green said the acquisition was “consistent with the company’s mission and passion for the Bible,” and that no one from Hobby Lobby was aware anything illegal was happening, seeing as Hobby Lobby “condemns such conduct and has always acted with the intent to protect ancient items of cultural and historical importance.” 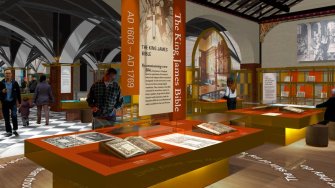 (Artist rendering of the Museum of the Bible)

Prosecutors note in the complaint that criminal activity took place, but chose to single out the shipper and neglect filing criminal charges against Hobby Lobby. Pursuing a criminal case might have proven difficult for prosecutors, as Patty Gerstenblith, one of the country’s leading experts in cultural property law, and the very same expert who warned Hobby Lobby against the import in 2010, said in an interview:

Yes it looks like there was criminal activity, but its not clear who committed the crime. The government would have to prove criminal knowledge beyond a reasonable doubt. A jury would have to find that these people knew not only what the law was but also that they were responsible for how the stuff was falsely labeled when it was imported. I have to assume the government felt it would have difficulty proving who knew what.

To resolve its case with the U.S. Attorney’s office, Hobby Lobby has agreed to pay a $3 million sum, assist with the return of all illegally imported artifacts, revise its import practices, and provide the government with detailed reports on its cultural imports.

A Nazi institute produced a Bible without the Old Testament that portrayed Jesus as an Aryan hero fighting Jewish people.
The Present

The right to know: How does censorship affect academics?

When academics and journalists forego sharing their findings, out of intimidation, we all lose out.
▸
7 min
—
with
Robert Quinn
The Present

Eric Weinstein and Jocko Willink discuss the reality of war

On the latest episode of The Portal, the two men talk about the consequences of a public being shielded from battle.
The Present

The controversy around the Torah codes gets a new life.
The Present

Why the wars America starts are unwinnable

Why do we continue to stay in Iraq and Afghanistan? Because of two big reasons.
▸
with
Danny Sjursen
Up Next
Surprising Science

Should We Reclassify Marijuana as a Hallucinogen?

A lot goes into classifying a drug, not only it’s effects but how it alters the brain.