Violence has always been one of humanity’s most serious global challenges. This is because for most of history, we were natural born killers.

Hundreds of millions of men, women and children have been killed or maimed by armed conflict, crime, extremism and sexual and gender-based violence.

Not only does violence exact a massive social and economic toll, it also corrodes democratic institutions and undermines fundamental human rights. There is also a risk of certain forms of collective violence escalating in the coming decade, not least with the stresses imposed by climate change and the risks posed by new technologies.

Yet far from the chilling headlines, progress has been made over the past half century in preventing and reducing many types of violence. While promising, the comparatively recent drop in violence is no guarantee that it will continue well into the 21st century. But with targeted interventions and sustained financing – especially in cities – most forms of violence could diminish further still. This is, in fact, one of the central aspirations of Sustainable Development Goal 16 on peace, security and justice. The world has a real opportunity to halve violence by 2030. Achieving this will require taking stock of where we are and taking decisions about where we want to go. This is precisely what bold initiatives such as the Pathfinders Partnership seek to achieve.

At the outset, it is important to reflect on just how many people are affected by violence. While difficult to measure with precision, as many as 600,000 people – including almost 100,000 women and girls – die around the world each year as a result of conflict, crime, extremist and extrajudicial violence. Millions more suffer physical and psychological injuries associated with warfare, criminality, and sexual and gender-based violence. Over 40 million people are displaced by violence – including 26 million refugees. If no steps are taken to change our present course, it is not at all certain that these trends will improve in the next decade. Yet if measures are taken to reverse these tendencies, literally hundreds of thousands of lives and trillions of dollars in reconstruction, reparations, productivity losses and insurance claims could be saved. 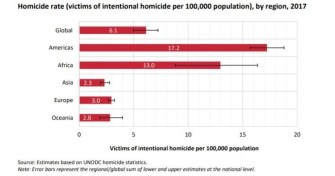 Homicide rates around the world, according to UNODC

The first step to effectively reducing violence by 2030 is to have a clear sense of how it is distributed in time and space. Take the case of lethal violence. There is a misperception that more people die violently in war zones than in countries at peace. While total levels of violence oscillate from year to year, it turns out that the reverse is true. The UN Office for Drugs and Crime estimates that the ratio is roughly 5:1. Put simply, many more people are dying violently as a result of organized and interpersonal crime in countries like Brazil, Colombia and Mexico than in internal conflicts in countries such as Afghanistan, Syria and Yemen. This is not to say that one type of lethal violence is more important than the other, but rather to ensure a more fact-based diagnosis.

A second step is to determine where violence concentrates and who is most at risk. A considerable proportion of all violence – that is, deaths, injuries and extreme violations – is concentrated in cities. These tendencies are likely to increase steadily given the inexorable urbanization of every region on earth. Cities in Latin America and the Caribbean – already one of the world’s most urbanized regions – feature some of the highest levels of lethal and non-lethal violence. It is home to 43 of the world’s 50 most violent cities. Meanwhile, most conflict and terrorist-related deaths are concentrated in a handful of countries in Central Asia, the African Sahel, North Africa and the Middle East. Irrespective of where it occurs, young males are most at risk of perpetrating or being victimized, although women and girls experience horrific forms of violence ranging from femicide to rape and abuse.

The third step is to acknowledge the risk factors that give rise to various types of violence. Although violence is multi-factoral, a number of recurring risks stand out. For example, social and economic inequality is high on the list, as are concentrated poverty, rapid unregulated urbanization, a high level of youth unemployment, and weak security and justice institutions that lead to soaring levels of impunity. Other situational factors loom large, including exposure to narcotics and alcohol and the availability of arms. Many of these factors cluster in urban settings, especially in neighbourhoods exhibiting concentrated disadvantage, social disorganization, and low levels of social cohesion.

If violence is to be genuinely diminished, it is important to acknowledge its many “hidden” forms that are routinely excluded from the international agenda. Some governments are reluctant to discuss them on the grounds that they are considered an internal domestic matter. For example, there are more than 10 million people in prisons around the world, a significant proportion of whom are in pre-trial detention and living in inhumane conditions. There are also thousands of people who are missing – “disappeared” – not least union leaders, indigenous rights defenders, human rights activists and journalists.

The only way to make a serious dent in violence is by acknowledging its full scope and scale together with the factors that drive it. This must be accompanied by sustained investment in reducing the risks and improving the protection of affected areas and populations, and investing in solutions with a positive track record. In the US, for example, research suggests that a focus on reducing lethal violence in the 40 cities with the highest rates of homicide could save more than 12,000 lives a year. In Latin America, reducing homicide in just the seven most violent countries over the next 10 years would save more than 365,000 lives. 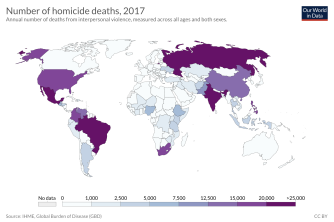 With targeted interventions, especially in cities, hundreds of thousands of lives each year could be saved

Image: Our World in Data

What are our next steps?

First, countries and cities should set out violence reduction plans with clear targets and performance indicators over the next decade. Effective data-harvesting systems to track trends, investment in in-house monitoring and analytical capacities to interpret results, routine supervision, ongoing training and professional development, and constant evaluation are all critical. This requires political leaders who are prepared to plan across electoral cycles and business and civil society champions who are willing to invest time, energy and resources to improve their communities.

Next, governments need to develop comprehensive approaches to preventing and reducing violence. This means investing in prevention – including the risk factors that give rise to violence. It also means building in peace architectures that can channel grievances non-violently. Ideally, governments can combine specific adaptations in policing practice with prevention and protection measures tailored particularly for at-risk places and people – from young out-of-work males to vulnerable women and children. This requires the creation of partnerships across institutional and bureaucratic silos – between state and city authorities, but also across different public entities. Central to success are strong partnerships with universities, research institutes, and businesses that can help identify evidence-based pathways for improvement.

What is the Annual Meeting of the Global Future Councils?

Another key ingredient of success is staying power. The most successful interventions take time to have a lasting effect. Consider São Paulo, for example, a city that has registered sharp reductions in its murder rate in recent years. Metropolitan São Paulo’s homicide rate fell from 49.2 per 100,000 in 2001 to just 5.5 per 100,000 between 2001 and 2018, making it one of the safest large cities in Brazil. In 1991, the city of Medellín in Colombia registered a homicide rate of 381 per 100,000—among the highest ever recorded anywhere. Today it is 21 per 100,000, below that of Detroit, Baltimore or New Orleans. It is challenging to maintain support given electoral cycles and economic volatility, but when interventions are terminated prematurely, the positive effects typically vanish just as quickly.

It will take unprecedented global partnerships to reduce violence by 50% over the next 10 years. But there are grounds for optimism. For the first time, the UN and World Bank have united behind a common framework for preventing conflict. UN entities such as the Office for Drugs and Crime (UNODC) and the World Health Organization (WHO) have made commitments to reduce violence. UN Women has announced a Spotlight Initiative to end violence against women and UNICEF has joined forces with others to advance INSPIRE strategies to help governments improve safety for all. Another promising initiative is the global campaign to end violence against children, which has already raised close to $38 million, strengthening the work of 49 partners in at least 37 countries. At the city scale, UN-Habitat is promoting safer cities and a coalition of mayors have launched the Peace in Our Cities campaign to localize SDG 16 commitments. Yet much more needs to be done.

The world has an opportunity to dramatically reduce some of the most egregious forms of violence over the next decade. To do this, we will need the same kind of energy and dedication that was mobilized to eradicate other killers like smallpox. We know what works, and what does not. There is no excuse not to deliver a safer world.

Instead of just Afghanistan, the U.S. military ought to withdraw from the entire Middle East and much of the rest of the world.
Strange Maps

Opponents of 19th-century American imperialism were not above body-shaming the personification of the U.S. government.
The Present

A new study from Iceland confirms that a shorter workweek improves productivity.
Up Next
The Present

It’s telling about attempts to save the industry.