Hyperloop Transportation Technologies, one of several companies racing to build the world’s first hyperloop, unveiled a prototype of a full-scale passenger capsule recently in Spain.

Dubbed the Quintero One, the sleek passenger pod measures 105 feet long, weighs about five tons and is capable of carrying between 28 and 40 people at a time. It’s been described as an airplane without wings, an apt description considering the pods would levitate above a magnetic track in a tube that’s virtually free of friction, a technique called electromagnetic propulsion. This would allow each pod to travel at speeds exceeding 700 mph, fast enough to travel the 380 miles from San Francisco to Los Angeles in about 30 minutes. 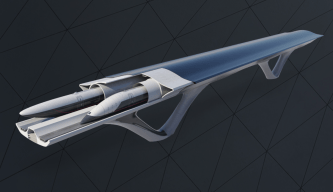 Artist rendering of a passenger capsule on track.

HTT CEO Dirk Ahlborn hopes to have a full-scale hyperloop running in a few years.

“In three years, you and me, we can take a hyperloop,” he told CNBC, adding that widespread implementation of hyperloop systems could occur within five to 10 years. “It’s definitely much sooner than anybody would expect,” Ahlborn said.

Based in California, HTT has said it wants to be the first company to build a hyperloop in the U.S. In February, the company published a video teasing the possibility of building a hyperloop that would connect Cleveland to Chicago, though Ohio officials said they’ll need to complete a months-long feasibility test before HTT could potentially pursue the plans. 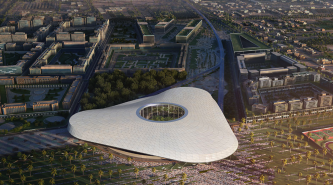 Artist rendering of a hyperloop station.

HTT plans to test Quintero One at a track in Toulouse, France. The company has already signed agreements with China, Ukraine and the United Arab Emirates to build full-scale hyperloops in the coming years.

In addition to HTT, two other companies are vying to build the first full-scale hyperloop in the U.S.: Richard Branson’s Virgin Hyperloop One, which he hopes to have ready within three years; and Elon Musk’s Boring Company, which recently began building a prototype of a tunnel system that could someday connect residential garages to a hyperloop.

The font that can improve your memory

Early reports show that it works, as odd as the approach may seem to some fontologists.